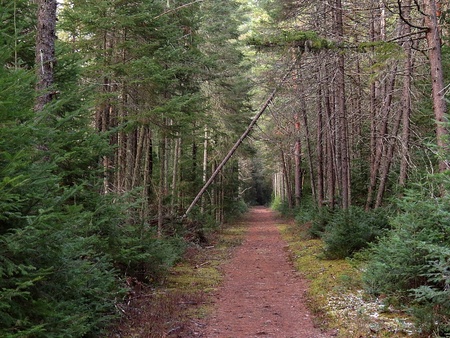 The roadbed of the Delaware and Hudson about a mile north of the old Bloomingdale station, 2020The Delaware and Hudson Railway began as a canal company in 1823, built to bring Pennsylvania coal to New York City. Part of the project was a short gravity railroad; when they added an engine in 1829, it was the first locomotive in the United States. They expanded their railroad operations through the northeast, by acquiring dozens of smaller railroads. Dr. Thomas Clark Durant's Adirondack Railroad, which ran from Saratoga to North Creek, was acquired in 1889, and the Chateaugay Railroad was acquired between 1879 and 1903.  Just north of Saranac Lake the line crossed the Bloomingdale Bog.

In 1946, New York Central acquired the Delaware & Hudson's Saranac Lake and Lake Placid Railway. Passenger service ended in the 1960s and freight service was discontinued in the 1980s.

New Route to the Adirondacks.—The Whitehall & Plattsburgh Rail Road is completed, and being operated from Plattsburgh to Ausable River Station, (near Ausable Forks) a distance of twenty miles, which will enable sportsmen and health and pleasure seekers to reach Saranac Lake, St. Regis Lake, Tupper's Lake, Long Lake, Racket River, Whiteface Mountain, and other noted hunting, fishing and pleasure resorts of the Adirondack Woods, at much less cost, and with much greater facility, speed and comfort than heretofore. Trains will connect at Plattsburgh with Steamers from all directions on Lake Champlain, and with the Montreal & Plattsburgh Railway for Montreal and Ogdensburg; and at Ausable River Station will be met by Stages for Baker's, Bartlett's, Paul Smith's, Hough's, Martin's, and other forest resorts.

INTO THE NORTHWEST LAKE REGION VIA THE LAKE PLACID DIVISION OF THE DELAWARE AND HUDSON RAILROAD.

Gateway No. I leads from Plattsburgh into the Great Northwest Lake Region over the Lake Placid Division of the Delaware & Hudson, dividing the patronage of the central and westerly resorts with Gateway No. 9.

The first section of the railroad was built by the State from Plattsburgh to Clinton Prison, at Dannemora, 17 miles. In 1880 the road was extended to Lyon Mountain, 17 miles further; but the influx of Adirondack tourists was increasing, and the road that climbed an altitude of 2,000 feet to reach the iron mines of Lyon Mountain, must go farther into the wilderness. So it was extended to Loon Lake. In 1888, 19 miles were added, bringing it to Saranac Lake, distributing its passengers by various stage routes that branch from it to a score or more of summer hotels. By it tourists reach Chazy, Chateaugay, Loon, Rainbow, St. Regis, Upper and Lower Saranac Lakes, Ray Brook and Lake Placid, going to Cascade Lakes and Adirondack Lodge by stage. Sleeping cars run through from New York to Lake Placid without change, arriving to breakfast. The new D. & H. flier "The Northern New Yorker," runs from Albany reaching Lake Placid in time for dinner. Through cars leaving New York in the morning arrive at Saranac Lake and Lake Placid in the evening, enabling passengers to take the stage ride from the railroad to the various hotels in the cool of the day. Drawing-room cars are run on all trains. Sleeping and drawing-room car accommodations can be secured in advance at any of the stations. A Sunday train each way will run during July and August, and all trains run through to Lake Placid during that time without change.

The oldest section of railroad track crossing the Adirondack blue line was taken out of service by the D. and H. railroad company Wednesday, when the company's trains began to use the New York Central right-of-way over the 22.1 mile stretch between Plumadore and Saranac Lake. The old track was used by one train daily in each direction.

The tracks, which are expected to be removed during the coming spring and summer, are laid over the bed of the original narrow gauge railroad constructed in 1887 by the Chateaugay railroad line. The road was first built from South Junction as far as Standish and later extended to Loon Lake and finally to Saranac Lake, where the first train arrived on Dec. 5, 1887.

The railroad section was in use for more than a half century. The Chateaugay line was built by the State of New York and soon was sold to Smith M. Weed of Plattsburgh. At the time of its construction, it was subjected to virulent attacks as leading to the depletion of the Adirondack timber supply and the ruination of the natural beauty of the mountain country.

The application for the change was filed with the Interstate Commerce Commission on June 18, 1940. It listed the reasons for giving up the right-of-way, on economic grounds and also to wipe out the duplication of rights of way. The only significant effect of the change will be the loss of $5,000 annually in taxes by the town of Franklin, Franklin county.

The D. and H. now operates only one train daily to Saranac Lake and return. The change has brought about the elimination of the flag stops at Vermontville and Bloomingdale. Travelers from Plattsburgh hereafter will pass through Rainbow Lake, Gabriels and Lake Clear Junction.

Of the 22.1 miles of railroad now abandoned, one section in particular— the four-mile stretch between Plumadore and Loon Lake, is one to bring pleasant reminiscence to many D. and H. engineers, firemen, and trainmen. This section of D. and H. tracks ran parallel with the New York Central, only a few hundred feet separating the two. Many stories are told of the “races” that were held there between the “rival” train crews.

The abandoning of the D. and H. section of tracks in this particular area also will mark the passing of Tekene Junction, which, in the heydey of lumbering, joined the Chateaugay railroad after passing over the New York Central from the west, in which direction the Tekene line ran for several miles into the East mountain sector.

However, the passing of the railroad line, will mean much to these hunters in another sense. Walking from Loon Lake station or from the Plumadore end, they will be able to walk the railroad bed without counting railroad ties.

The change in which the D. and H. will run its trains over the New York Central line will involve a considerable saving in maintenance for the D. and H., and it is not impossible that other similar changes will be permitted in the years to come.

Branch Line May Be Abandoned by D.&H. on Nov. 1st

On November 1, permission having been granted by the PSC, Lyon Mountain will become “the end of iron” in the parlance of railroaders, for on that date the D. & H. railroad is planning to abandon its train service west of that mining community.

The passing of the western section of the old Chateaugay Branch will be another step in the gradual disappearance of rails from an area that, in the heyday of lumbering operations, saw much activity, beginning three quarters of a century ago and thriving for many years.

Perhaps the most interesting section of the old Chateaugay Branch is that from Plumadore Junction westward past Loon Lake Station, a five-mile stretch over which the rails of two rival companies—The New York Central and D. & H. ran parallel. This stretch, over which trains were easily visible to rival engineers, witnessed many a hot race. Even today, the accomplishments of their pet engines are the boast of veteran engineers, long retired but still reminiscing about the old days. One of these is William G. Brown of this city.

The line, west from Lyon Mountain, ran south of Birch hill and crossed Brandy Brook and on a half-mile south of the south end of Chateaugay lake, through “the gap” and then south over Standish brook, where a spur bore south to the blast furnaces. Twin Ponds station was next and from there the Tail crossed into the town of Bellmont, Franklin county, proceeded past “the Springs” and on to Middle Kilns, then southerly to the upper kilns and Lost Pond, then westerly to Wolf Pond and from there bore northward to Plumadore Junction, from which point the parallel rails ran well beyond Inman, (Loon Lake Station) scouting the north end of Lake Kushaqua and on westward to Lake Clear Junction.

Spurs from this stretch of rail ran from Tekene Junction, just north of Loon Lake, and there was also another narrow gauge line operated into the Debar mountain sector by the Brooklyn Cooperage Co. Other spurs led to Plumadore pond and to the foot of Plumadore and Catamount mountains.

Just prior to the war the D. and H. Co. was granted permission to abandon its line westward from Plumadore Junction and to operate its two daily trains over the New York Central rails. There Immediately followed the removal of rails from the “Junction” to Inman. This railroad bed, its ties and rails missing, immediately was put into use by sportsmen motorists, who managed to maneuver their cars long distances on their hunting and fishing trips, much in the same sense that, years before, they used the abandoned rail beds of the Tekene Junction and Brooklyn Cooperage railroads for the same pur-pose, opening easier access to an otherwise isolated sector.

Abandonment of the line west of Lyon Mountain will terminate the direct railroad link with Lake Placid and Saranac Lake. To travel by rail hereafter, it will be necessary for a passenger to by way of Rouses Point and Malone. Passengers to the mountain resort villages have not been numerous in recent years, though, and there were hundreds of trips when the only riders were the train's crews, railway mail clerk and baggageman.

Service to Dannemora and Lyon Mountain, however, will be maintained with daily trains operating Perhaps on a revised schedule, to be announced later.