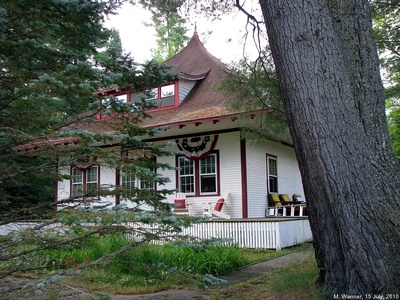 Caddy House, built in 1895, may have been designed by Stanford White. From 1946 through 1966 is served as a Golf Pro Shop and Post Office. It is now a private home. 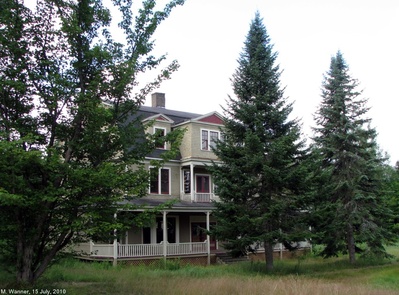 Irish House, originally an annex of the hotel, it was built about 1905. It was operated as an inn from 1958 to the late 1970s. It is now a private residence. 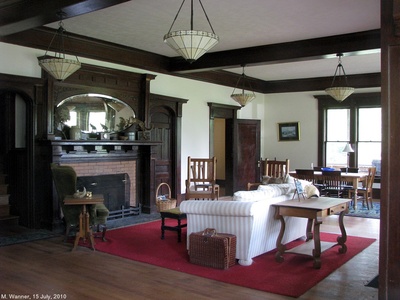 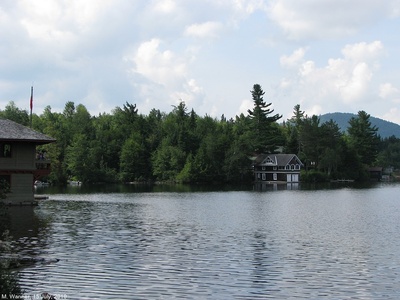 Loon Lake boathouses. The one at left, Twin Pines, housed the hotel's launch, WHOISSHE, so called because it was only sent out for the most important visitors, thus piquing the curiosity of onlookers. 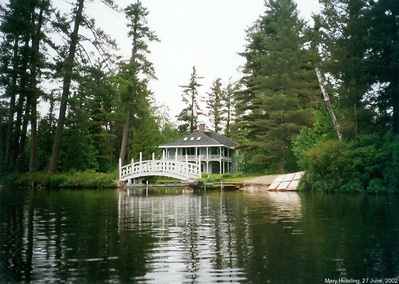 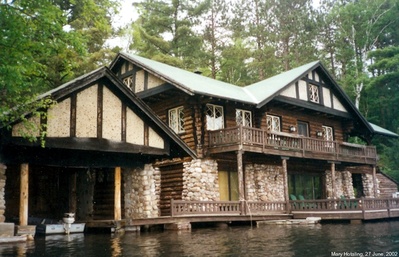 Seven Keys boathouse Loon Lake is a hamlet in the northern portion of the town of Franklin; it is named after a small lake. Monroe Hall, of Plattsburgh, built a mill on the outlet of Loon Lake about 1840.

Paul Smith got his start as a guide at Loon Lake, and started his first hotel there in 1848, and his second venture, "Hunter's Home", built on 200 acres on the north branch of the Saranac River was nearby. He continued in that location until 1858, when he moved to Lower St. Regis Lake.

The area was first reached by railroad in 1887 from Plattsburgh via the Chateaugay Railroad; later, a spur railroad was built from Loon Lake Station, four miles west to the DeBar Mountain tract for hauling timber and pulp-wood. Trains continued to stop at Loon Lake until 1946.

The Loon Lake House, established in 1879, was a grand hotel that catered to "sportsmen and pleasure seekers", built by Ferdinand W. Chase from Vermont in 1878; it started with thirty-one sleeping rooms, but grew to a capacity of 500. The property grew to include a tract of over four thousand acres, a large hotel building, two annexes, and a number of cottages and boat houses, as well as an 18-hole, PGA golf course, a tennis court, pool and billiard parlors, and a bowling alley. It went bankrupt in the early 1930s, but continued in business through the early 1950s, when it was used as a summer camp. It burned to the ground on September 19, 1956. By 1958, the property had been auctioned; many of the cottages were purchased by families that had rented them for years while the hotel was operating. Today, the hamlet's population is largely seasonal.

In the 1930s, Loon Lake, along with surrounding villages, voted to send their high school age students to Saranac Lake High School. 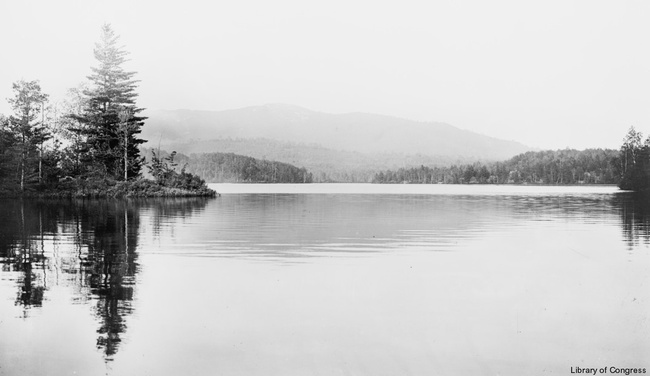 —Most of the farmers have their crops in.

—There are a good many potatoes for sale here. They can be bought at a fair price.

—The rear of the combined drive of logs, passed under the bridge, at Hunter's Home, on Saturday last. Now the drive is toy us, the fishing la the river is good.

—The weather has been cloudy most of the time since a week ago last Saturday. 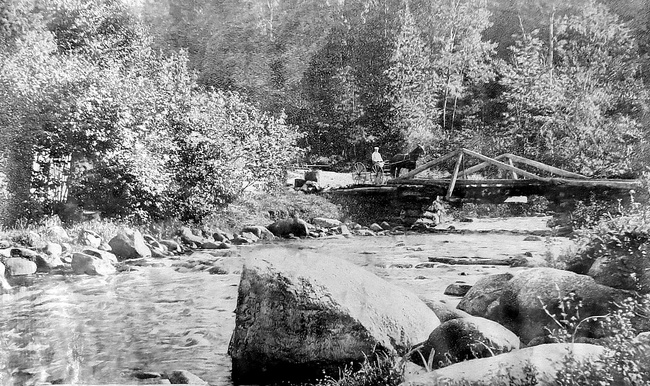 "The Drive, Loon Lake.  From a photograph by Chandler, St. Albans"
c. 1900.  From "Scrapbook No. 1," Saranac Lake Free Library—The minister from Vermontville will be at the schoolhouse at Hunter's Home on Friday, and will preach at half-past seven in the evening. This work, it is hoped, will continue thro' the coming year. Willis McCasland, (the teacher at Hunter's Home,) walked to Vermontville for the purpose of arranging to get the minister to come.

Raging Through the Adirondack Region, 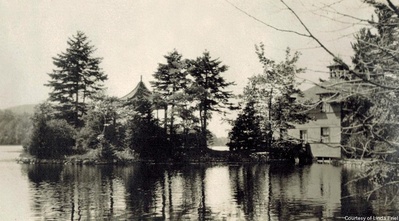 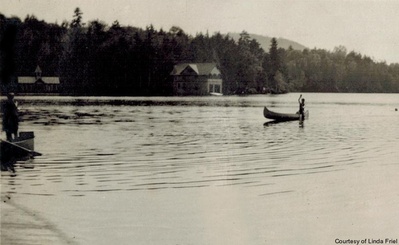 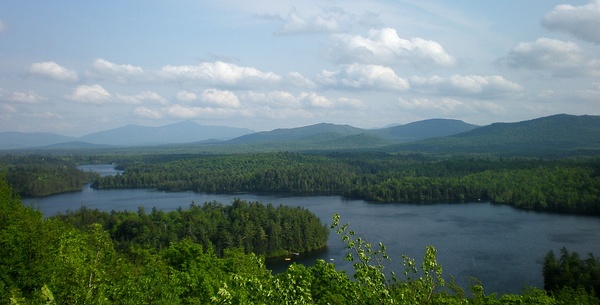 Thousands of Acres of Timber Burned Over.

The most extensive forest fires in the past ten years are now raging in the Adirondacks, and so threatening have they become that yesterday the Chateaugay Ore & Iron Company sent every man they could spare from their mines at Lyon Mountain to fight the fire fiend. Employees of the Chateaugay railroad were also detailed for the same work, and it is estimated that fully 1500 men were engaged in checking the progress of the flames, which can only be entirely extinguished by rain.

Great damage is reported to the Loon Lake hotel property and the Rockefeller estate, which covers over 50,000 acres of land, and upon which a vast amount of money has been expended in macadamized roads, artificial ponds and camps. The Rockefeller camps are located about Big Bay pond but no damage has been done to the building. Crowds are fighting the fires, and it is believed they are under control.

A year-round recreational community is being planned for the Loon Lake area, about 20 miles from Saranac Lake, The Enterprise learned today. Leisure Properties. Inc. has purchased approximately 3,000 acres of the old Loon Lake House and 30 acres of the Seven Keys Lodge. Sam Garlan, former owner of Seven Keys, will be in the area tomorrow to meet with the heads of Leisure Properties, Inc. to arrange to lease back the lodge and operate it as in past years. In fact, he told The Enterprise by telephone from New York this morning that, probably due to Expo '67, he has already more reservations for this coming summer than at any time in the past. The heads of the new company are James Soden, president, and Hubert Doberer, executive vice-president. Soden is a Montreal attorney and Doberer is from Montgomery Center, Vermont. It will be an American company and largely American-owned.

Mr. Soden told The Enterprise that there is some possibility that some building will begin this summer. He said the project would involve fully winterized recreation homes, with all kinds of recreational activities available, even including a community but non-public ski development. He added that Whiteface Mt. is only nine miles from the area by a back road which is cleared during the winter.

The Seven Keys Lodge, possibly with some future modifications, would be the center of the community, a kind of club-house for the other houses.

Mr. Soden did not want to estimate this morning how many houses would eventually be built on the property or how large the community would be.

One of the most beautiful spots in the Adirondacks, Loon Lake was for many years noted for the Loon Lake House which was a great center of activity far back in the last century. The main hotel burned down some years ago, as did most of the old Adirondack hotels, but some of the houses have continued to be used.

The 18-hole golf course has continued in use, especially by the guests at the Seven Keys Lodge.

James E. LaPan of Saranac Lake is attorney for the new owners of the property.