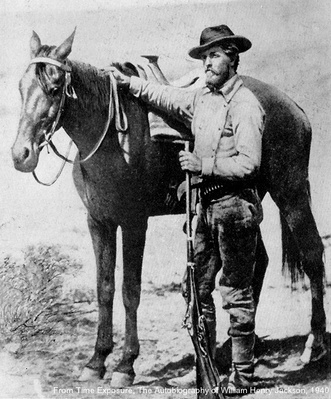 William Henry Jackson was an explorer, painter, and photographer; after serving in the Civil War, he became noted for his geological survey photographs and especially for his images of the American West.

Born in Keeseville, New York, he was interested in painting from a young age. At 19 he served a year in the Civil War, and then headed west, where he got involved in photography, beginning a career that spanned forty years and that resulted in some 80,000 images. Though he was most famous for his western images, a number of his photographs of the Adirondacks are in the Library of Congress collections.

He was a great-great nephew of Samuel Wilson, the progenitor of America's national symbol Uncle Sam.

A number of William Henry Jackson's photographs of the Saranac Lake area from the Library of Congress collections are shown on this wiki site, in whole or in part.  Cherokee Lodge on Upper Saranac Lake belonged to a W.H. Jackson; it is not clear whether the name refers to the famous photographer.

Articles that include photographs by Jackson