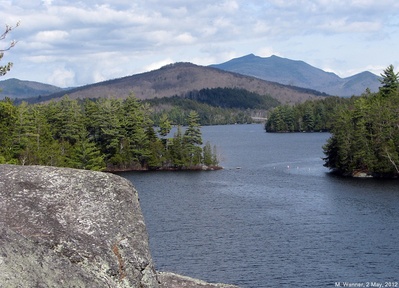 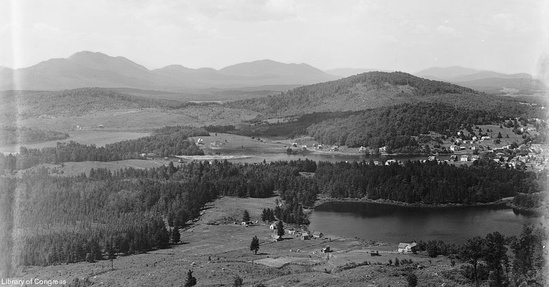 View of Moody Pond, Lake Flower, Dewey Mountain (right) and Saranac Lake village from Mount Baker, between 1901 and 1906. William Henry Jackson Dewey Mountain is a 2050-foot mountain southwest of the village of Saranac Lake. A hill that slopes down to Lake Flower and is a shoulder of Dewey Mountain has been called Blood Hill, Maple Hill, or sometimes Reservoir Hill or Petrova Hill. Kiwassa Lake Road runs along the eastern side of the hill, and eventually of Dewey Mountain. It is one of three small mountains surrounding Saranac Lake: the others are Mount Baker and Mount Pisgah. It was originally called Ring Hill. 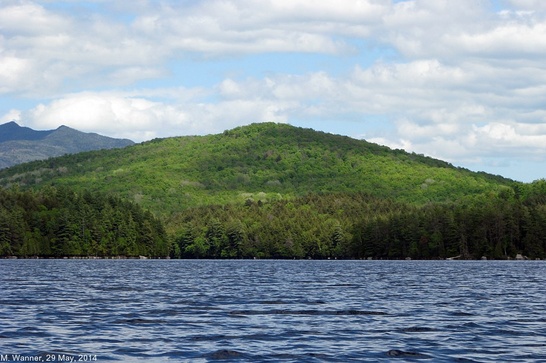 Dewey Mountain from Lower Saranac LakeIn the early 1900s a man named Hull owned most of Dewey Mountain, and the Miller family also owned a lot of acreage, according to ski historian Natalie Leduc of Saranac Lake.

According to Henry Ives Baldwin’s 1989 memoir The Skiing Life, in the 1920s the 120 members of the Saranac Lake Ski Club would hold weekly outings or meets, the latter usually consisting of ski jumping followed by a cross-country race—early Nordic combined. Competitors would come from around New England, New York City and Montreal. One of the jumps was on Blood Hill (now Lake Street Hill), an eastern shoulder of Dewey.

“Ski Trails of New York State,” a 1937 booklet published by the Conservation Department, mentions, “Mt. Dewey Downhill: Two trails about 1/2 mile each in length with 300-ft. drop. Access: Start at summit of Dewey Mt. One running to and ending on Kiwassa Road directly opposite Saranac Lake Open Slopes [Betters Hill]. Other one comes out on Glenwood Road in Saranac Lake Village. Rating—novice.” (See map.) This downhill run required the skier to earn his or her turns by hiking or skinning up the slope. There was not a strong dichotomy yet between cross-country and alpine skiing.

The booklet also mentions a cross-country trail that skirted Dewey's top: “Kiwassa Lake [trail] Maintained by the Conservation Department: Cross-country trail, novice in character and easily accessible from Saranac Lake Village. Length, 3 and a half miles. Begins on Kiwassa Road, 2 miles from Saranac Lake. Other terminus of trail ‘Old State Road’ (local name) three and a half miles from Saranac Lake. Highway now being improved and upon completion will be main route between Saranac Lake and Tupper Lake. Both ends of Kiwassa Trail accessible to automobiles throughout winter. Elevation at start of trail on Kiwassa Road 1,640 feet and at end on ‘Old State Road’ 1,580 ft. High point of trail, 1,840 feet, reached on mountain summit just east of Kiwassa Lake. An Adirondack open camp just south of Kiwassa Lake outlet and two and a half miles from start of trail, provides convenient luncheon stop.” 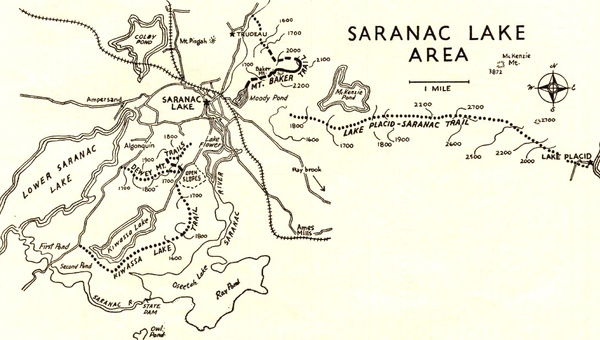 Click to enlarge. Source: "Ski Trails of New York State," circa 1937, New York State Conservation Department booklet. Courtesy of The Adirondack Room, Saranac Lake Free Library Although Dewey Mountain is best known now as a cross-country ski area, its slopes briefly hosted an alpine area served by a rope tow; in 1941–42 Charlie Keough and Hector Guy Wood rigged the tow and ran the downhill area. That winter there was almost no snow, Leduc recalls, and World War II began to rage, so the venture never made it beyond one season. (Skyview, at Donnelly’s Corners, revived in the alpine ski boom after the war. Mount Pisgah also got off the ground and by 1950 became the focus of all lift-served skiing in Saranac Lake.)

In 1978, the Town of Harrietstown owned vacant, forested land on Dewey’s northwest slope at the western State Route 3 entrance to Saranac Lake. Sue Dyer, head of the Saranac Lake Area Chamber of Commerce, and some other volunteers suggested the property could make the core of a cross-country ski area. The town was not using the land, and the town board under Supervisor Ron Keough was very supportive of the idea.

The chamber and town invested in the start-up of the trail system: $25,000 and $10,000 respectively, according to the December 5, 1980 Adirondack Daily Enterprise. They applied to the state Bureau of Outdoor Recreation for a grant and were reimbursed $12,600.

Phil Feinberg, a member of the chamber board, approached Craig Ward to design the trail system. Ward had just been captain of the U.S. Cross-Country Ski Team for the 1980 Olympic games in Lake Placid. The state grant covered some of Ward’s fees. But it took a major volunteer effort to carry out the trail work and to open the facility. New trails were cut and existing logging roads were cleared. Bridges were built, low spots filled. “Everything has worked because of the tremendous volunteer effort that has been put in up on Dewey Mountain,” Feinberg says.

Several trails crossed adjoining private lands. Feinberg, who is in the real estate and insurance business, approached the landowners on behalf of the chamber seeking their signatures on easements giving the town the right to use the land for recreational trails; landowners would not be liable for any injuries. Most landowners received the idea positively and transferred the easements for $1, Feinberg recalls. The town banned hunting and trapping on its Dewey land in 1981.

It is believed that the area opened for skiing 1980–81. Lighting was added for night racing and skiing.

In the summer of 1981, a 30-by-24-foot log warming hut was constructed at the trailhead and parking lot, on Route 3. The Chamber of Commerce and inmates from the state’s Camp Adirondack correctional facility cleared the site and built the foundation, according to the July 2, 1981 Adirondack Daily Enterprise. Log house builder and designer Krissa Johnson and apprentices from North Country Community College’s Center for Adirondack Studies program were to build the structure in the “art of Scribe Fit Log Building,” the paper reported. In fact that plan did not come through, according to Tom Seymour, a carpenter who supervised a crew of inmates from Camp Adirondack, the state correctional facility in Ray Brook. The inmates provided much of the labor, and Johnson's role was not as large as planned.

Around 1993 a second lodge was added to provide a four-season public-use room, a manager’s office and equipment storage. It too was constructed primarily by inmates at Camp Adirondack, working under Tom Seymour's guidance.

Dewey right away became a popular race area, especially the Tuesday night “under the lights” X-C races and high-school races. The technique was classical kick-and-glide until skate-skiing caught on in the 1990s. The trails were too narrow for skate-skiing (which, along with several steep runs with many turns, may have led to the nickname “Screwy Mountain”), but they have gradually been widened and side-cut for excellent skate-skiing. Dewey also been called “the People’s Mountain.” [source?]

Dewey has 440 feet of vertical drop, 50 percent more than the alpine area at Pisgah. Some sections, such as Killer Hill, are long and steep, but there is a variety of terrain for all ages and abilities.

The Town of Harrietstown has continued to own Dewey and contribute to its annual operation, primarily by contracting with a manager to run winter events and keep the trails groomed.

In 2005, a citizen group called Dewey Mountain Friends formed to support capital improvements, in partnership with the Town of Harrietstown and Saranac Lake Rotary Foundation. Their efforts have built a new lodge, dedicated in 2015, as well as purchased a new groomer and snowmobile and contributed to trail improvement.

The "Orange Trail," the eastern third of Dewey’s skiing area, was closed when a housing development was approved there on privately-owned land in 2008.

In 2009 and 2010 the Bark Eater Trail Alliance (BETA) improved some snowshoe trails for multi-season use, with a design focused on mountain biking. BETA also built a mountain bike trail connecting the lower east trails to the summit trails.

Dewey currently offers about 8 km of ski trail plus an equivalent amount of snowshoe/mountain-biking trail. Dewey is also a social hub, where skiers and musicians gather for Friday Night Ski Jams, and kids and grownups gather for races and family days.

More than a hundred skiers can pass through Dewey on a Tuesday, but it's often quiet, more like backcountry, especially the ungroomed trails near the top. 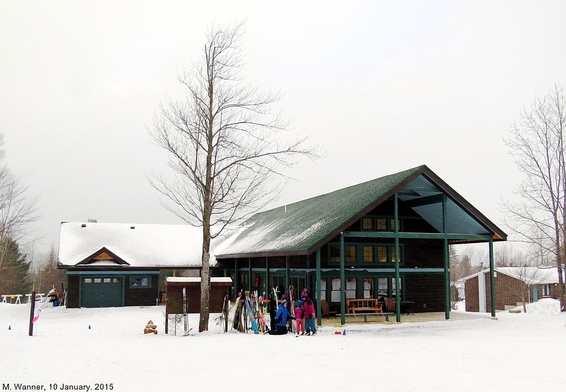 The new Dewey Mountain Lodge, 10 January, 2015In being exposed to winter sports at Dewey, thousands of local youth have gained a passion for them and for lifelong fitness, and many have traveled beyond the Adirondacks to compete on a higher level.

Notably, three Dewey youth have competed in the Olympics. Tim Burke, of Paul Smiths, is a three-time Olympian and made history as the first American to wear the yellow bib as leader of the World Cup circuit in biathlon. Annelies Cook, of Saranac Lake, competed in biathlon in the 2014 games in Sochi. Bill Demong, of Vermontville, has competed in four Olympics and won gold and silver medals in 2010. All three still compete at the World Cup level.

Burke, Cook and Demong serve as honorary trustees of Dewey Mountain Friends and helped run a fundraising campaign to replace the outmoded base structures. The effort raised $477,000 in private donations from more than 600 local households, businesses and foundations, plus $150,000 in in-kind donations of labor and materials from local contractors. The new ski lodge opened in late 2014 and was dedicated on January 10, 2015.

With input from the Town of Harrietstown, Dewey Mountain Friends under went a process to identify facility needs in 2010. Then Kris Cheney Seymour provided a conceptual drawing. Building Committee Chairman Tom Boothe led Dewey Mountain Friends through a prioritization process to adapt and revise the concept drawing to an affordable, functional structure that meets current needs as well as provides room for larger events and new year-round programming. North Woods Engineering (under the leadership of Joe and Cindy Garso) took a rough sketch of this new concept and refined it, providing schematic designs and site plans, making a substantial in-kind gift of services.

Tom Boothe also “gave this project life when it needed it most,” as Dewey Mountain Friends Chairman Chris Morris said at the dedication ceremony. “Thanks for making the impossible seem so much more tangible.” Tom stepped up in early 2014 to make a large gift in hopes of inspiring other giving as the existing facilities approached condemnation. The Keet family, longtime supporters of Dewey Mountain, generously matched Tom’s generosity, bringing the fundraising total close to the goal and inspiring a group of generous follow-on donors.  In all, more than (550) households and businesses contributed funding to Dewey Mountain’s lodge. The result is an efficient, beautiful lodge that the entire community can be proud of.

Board To Grade Ski Slope

The Saranac Lake village board has voted to spend $300 on the grading of slopes on Dewey mountain. A private ski tow also will be constructed there, thus giving skiers the same facilities they enjoyed last winter on both Betters Hills and Donnelly's farm.

Dewey mountain is a compromise location. It is much closer to the village than either of the two former ski tows and the slopes that were popular last year. Donnelly's farm was admittedly the better slope but it is a considerable distance from the village.

SARANAC — Dewey Mountain, this village's new ski slope, is expected to be ready for operation about Dec. 10. The slope is 300 feet wide, more than 1300 feet long and it will have a 1000-foot tow.

See William Dewey for a possible source for the name of Dewey Mountain.