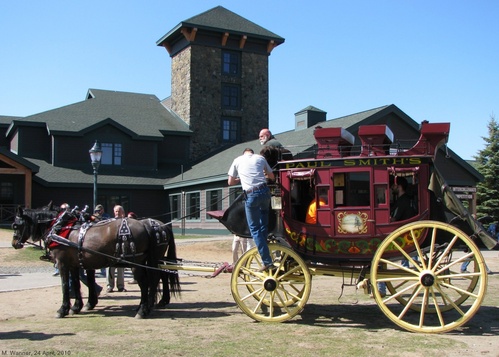 An original Paul Smith's stage coach, still used by Paul Smith's College The earliest stage coach route in the Saranac Lakes region served Martin's and Paul Smith's Hotels, coming in from Keeseville. In 1860, Virgil Bartlett bought the route, and operated it for fourteen years, hiring Isaiah Vosburgh as a driver in 1862. Paul Smith's line, established in 1855, ran through Saranac Lake to Bloomingdale and then through Franklin Falls; Fitch O'Brien was the chief driver for twelve years. 1

Stages through the ages

Images of stage coach days with whip cracking drivers have been usually associated with the old wild west, Indian attacks, and masked holdup men. During the 1800s, however, the stage coach was the main mode of passenger travel in the Adirondacks 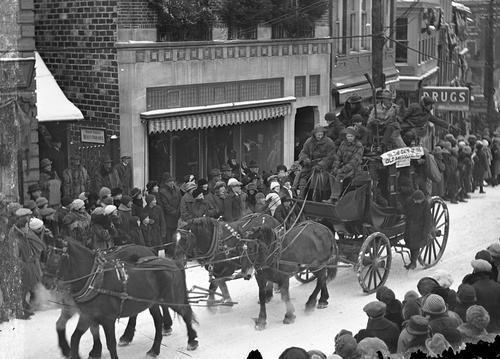 Stage coaches were obsolete by the time of this 1918 Winter Carnival parade.  The sign on the stagecoach reads "In the days of the old Ampersand Hotel" (see photograph below).  The Mulflur Building on Broadway is behind the stagecoach.
Photograph courtesy of the Lake Placid-North Elba Historical SocietyAlthough the local version required no one to ride shotgun, the road conditions promised perils enough. Many of the early sportsmen told of bone jarring stage rides which had to be endured in order to reach the inner sanctums of the wilderness. The jolts were caused by rocks, potholes, mud, loose sand, and sections of corduroy. Coming north from Elizabethtown many a passenger had to get out and push to aid the driver up through the Cascades.

Similar conditions were met in the Wilmington Notch by those who journeyed from that direction. Judging by the elapsed time runs the easiest approach was from the railhead at AuSable Forks. A Paul Smith's Hotel stage could make the trip in 5 hours by changing horses at Franklin Falls. A recorded time-table of such a journey read like this: 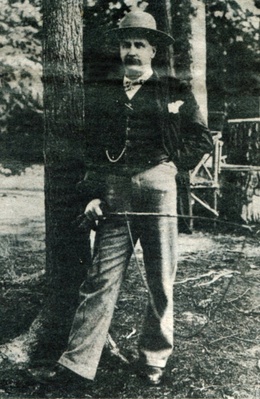 A friendly rivalry existed between the owners of the early hotels to obtain the best drivers, for their tally-hos and records, time wise, were dutifully maintained. Paul Smith, as usual, came out on top when he engaged the services of George Meserve, the undisputed monarch of all Adirondack stage coach drivers. A slightly exaggerated story of his prowess was circulated in that he could flick a fly off his lead horse's ear with his reins in his left and his whip in his right hand while at full gallup. 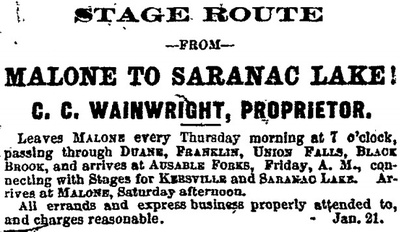 Malone Palladium, February 11, 1864Meanwhile, back in Saranac Lake, Fitch O'Brian, Meserve's former associate, was gaining quite a reputation in his own right. He, too, possessed a rare ability to handle horses.

His coming was always met with great anticipation and an exuberant welcome. Men like Fitch O'Brian and George Meserve were highly respected members of the community as well as charismatic members of their picturesque occupation. Together with the famous guides they were the demigods of the Adirondacks. From the driver's seat they rode this crest of popularity until the coming of the railroad.

There were many other drivers of note and each area had its favorites. Arriving at Martin's on Lower Saranac Lake came stages from AuSable Forks, Elizabethtown, and Keeseville During 1868 and 1869 Charlie Reynolds from Keeseville proudly signed the register as "Driver of the Mail Coach." Driver Virge Bartlett used Martin's as his terminus and his clients had to complete their journey by boat. There was so many other terminals that a veritable army of drivers was required to deliver passengers to the popular resort areas such as Loon Lake, Saranac Inn, Blue Mountain Lake, Tupper Lake, Lake Placid, Long Lake, and those hotels already mentioned.

Prominent among those drivers were such well known names as McQuillan, Burt, Miller, Derby, Hinds, Penfold, and Vosburgh. 2 In a 50-year-old clipping from the Franklin Daily Times George Wilson recalls those days when he drove the stage from Malone to Loon Lake. Wilson came to Malone as the driver of an eight horse hitch for the P.T. Barnum circus but decided to leave the sawdust circuit in favor of the Chisholm and Tobey livery.

Leaving Malone at 5 A.M. Wilson drove a six horse tally-ho along a route that wound through Whippleville, Chasm Falls, Studley Hill, and Duane where a change of horses was made. The next stops were at Meacham and Paul Smiths prior to the final run to Loon Lake. In his interview Wilson mentioned that, at that time, only three other former stage drivers were still living; Tuffield Latour and Charles Greenough of Saranac Lake, and Will Burt of Lake Placid. 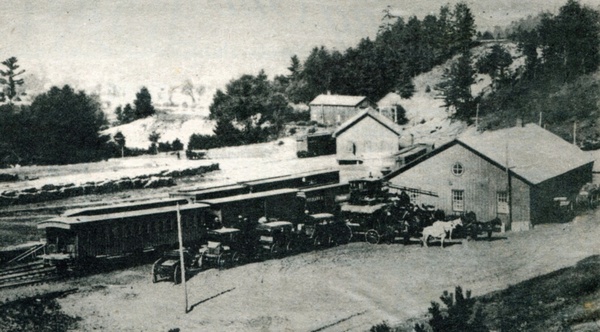 As noted earlier the greatest problem facing the stage coach driver had to be the horrible road conditions and, after dark, these hazards could become quite dangerous. A fallen tree, a deep pot hole, or a rolling boulder might very well cause a serious accident. To the credit of these drivers such unfortunate happenings were rare.

Today with federal, state, county, and town highway departments it is difficult to comprehend the morass of civil funding which existed in those early days of road building and maintenance. The north country was plagued with backwoods communities which were widely separated and not very well-heeled financially. For example there was the Northwest Bay road. In 1824 the legislature passed an act authorizing commissioners to assess "every free male inhabitant living thereon, between Saranac River and Meacham Lake, not to exceed ten days work in each year." This was said to be the first route for regular stage coach service in Franklin County. According to Seaver's history of Franklin County "the coaches were of the old regulation style, with thoroughbraces for springs, and were drawn by four horses. Horses were changed every ten or twelve miles, and arrival at stopping places always made on a run and with horn sounding, was an event in the life of a community." 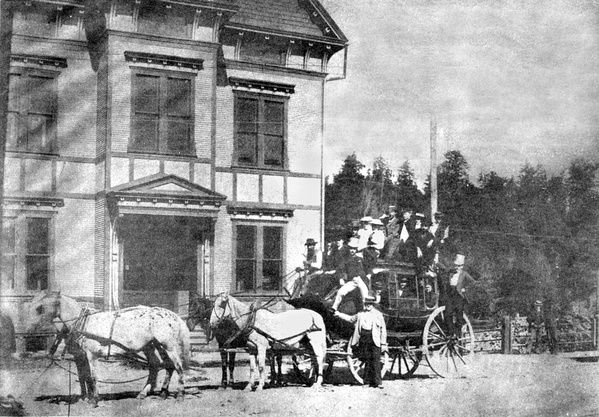 The stagecoach from Lake Placid in front of the Harrietstown Town Hall. Adirondack Daily Enterprise, February 6, 1988

The locomotive bell tolled the end of the stage coach. Except for short runs between resort hotels and the railroad station they were history. Passengers, baggage, and the mail were now carried by the iron horse and the intrepid stage drivers, those heroes of a vanishing breed were now forced to seek new forms of employment. A few, like George Meserve, found employment with wealthy families where they could care for the horses, the tack room, and drive a fancy cabriolet. Of course for many of the old time drivers this was a much too tame form of making a living. The romance and excitement were gone forever.

Stages,--A Dai1y line is now complete to Franklin Falls in the vicinity of the fishing and hunting grounds of the Saranac Lakes. Business men, and visitors may thank our friend J. B. Dickinson for this much needed, and to be, much frequented route.

The Franklin Falls Stage Line have enlarged their field of usefulness, by extending their line of stages to the Saranac Lakes, to accommodate the large and increasing travel to the celebrated sporting grounds. Tuesday and Fridays they will run regular to the lakes, early every Wednesday and Saturday morning arrive [sic: arriving] at Ausable Forks in time for Keesville and Port Kent Stages. This makes a continuous line of stages from Port Kent to the Saranac Lakes. Extra teams are always in readiness at the Fork[s] to carry passengers to and from the Lakes whenever they wish to go, at Stage Fare. We commend this line to the public as every way worthy their patronage.

Many residents of this resort will rub their eyes in amazement during the two days of the Lake Placid Riding club's horse show on August 22 and 23 and think that they are back again in the last century when they behold an ancient stage coach drawn by eight horses, rumbling up and down the streets of this village. 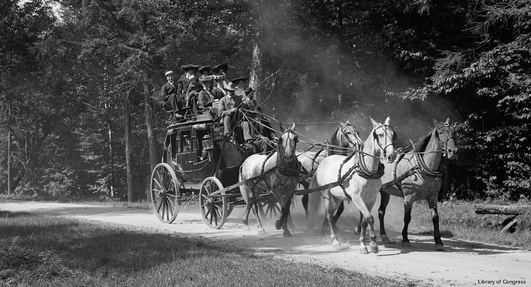 "An Adirondack stage," Detroit Publishing, c. 1903The equipage will be none other than that famous, old stage coach which, fifty years ego, hauled passengers between the Delaware & Hudson railroad station at Port Kent on lake Champlam and Paul Smith's on the St. Regis chain. George Meserve, known to many Placid residents, was for many years the driver of this coach.

Some years later the great coach, was used to haul passengers from the New York Central railroad station at Gabriels to Paul Smith's hotel, prior to the building of the Paul Smith's electric line, recently abandoned.

Use of the relic of travel of another day was given the local horse-show committee by Phelps Smith, president of the Paul Smith's company.

Headquarters for the old coach will be at the Stevens house, where it is expected to figure largely in the festivities planned for the two days of the show. Mrs. Raymond F. Stevens, wife of the executive chairman of the horse-show committee, will entertain a group of friends on a trip from the hotel on Stevens hill to the show grounds and back on the opening day of the show, personally tooling the ancient coach herself.

Of the traditional mountain type of coach so commonly used in other days, this one is hung upon huge leather springs. It has heavy, curved doors, and seats for passengers inside and on the high roof above the eight horses that draw it.