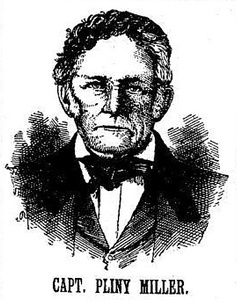 Captain Pliny Miller commanded a militia company in the War of 1812. He came to Saranac Lake from West Sand Lake in Rensselaer County in 1822 when his lumbering company in nearby Wilmington was forced into bankruptcy by the failure of its main customer. With a partner, Alric Mann Bushnell, [but see comment below] he purchased 300 acres along the Saranac River in what is now Franklin County from John R. Thurman and others of Sandy Hill, New York. Much of the present village of Saranac Lake stands on Miller's original land. In 1827 he built a sawmill, erecting the first dam across the Saranac River, at the site of the present dam; this created a large mill pond where logs were gathered each spring for processing. He built a house near the present Village offices. In 1910, the mill pond was cleared of stumps and renamed Lake Flower, in honor of New York governor Roswell P. Flower, who provided funds to clear it of tree stumps.