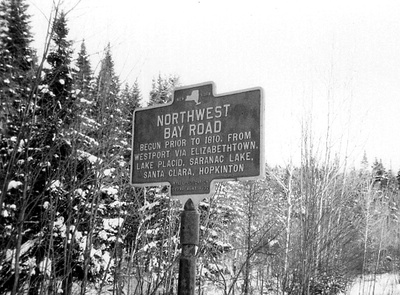 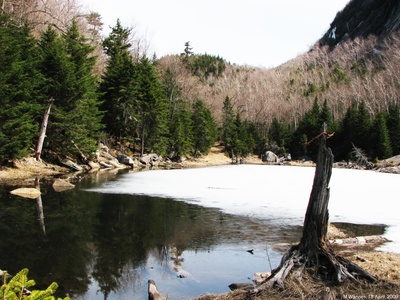 A beaver pond across the original route of the Old Northwest Bay Road, also known as Old Military Road, that runs up the valley north of Pitchoff Mountain, a mile northwest of New York Route 73 at the Cascade Lakes.

The Old Northwest Bay Road was the first road into Saranac Lake from the east, established by an act of the New York State Legislature on April 5, 1810. It was to run approximately ninety miles from Northwest Bay on Lake Champlain (present day Westport, New York) through Elizabethtown, Lake Placid, Ray Brook, to Saranac Lake, and then on to Hopkinton, New York. The St. Lawrence Turnpike ran from Hopkinton through Russell to the Oswegatchie River and thus gave access to the St. Lawrence River at Ogdensburg.

Initial funding proved inadequate; on April 17, 1816 an Act was passed to complete the road, and separate commissioners were appointed to complete the western eastern sections of the road. The commissioners were empowered to assess each town served by the route $75 to help underwrite the cost. In 1824, another Act authorized the commissioners to assess every male living on the road between the Saranac River and Meacham Lake no more than 10 days labor on the road each year. It was completed about 1817.

After 1850, the western end of the road was seldom used and eventually became impassable, as most traffic used the shorter Port Kent to Hopkinton Turnpike, built in the 1820s. At the same time, the eastern section saw heavy use with the development of Saranac Lake and Lake Placid as hunting, fishing, and health destinations. Stagecoaches ran on daily schedules and many inns were established to accommodate travelers.

In his A History of the Adirondacks, A.L. Donaldson writes:

Starting at North West Bay or Westport the road ran through Elizabethtown to North Elba past John Brown's farm to Ray Brook. From there it followed the upper road to Saranac Lake, entered the pines by John Benham's old cabin and emerged by the Baker Bridge. Here it crossed the original wooden bridge, turned around the north end of the first Ensine Miller house and climbed the hill to Highland Park, coming into it near Mrs. Mary Nichols's property. It then followed, not exactly, but in a general direction, the Park Avenue of to day, finally merging with it at a spot still traceable. This is near the sanatorium gate, and the houses owned by Dr. Brown and Mrs. Wicker. Entering the sanatorium grounds the old road followed about the course of the present one, but turned at the north corner of the Administration Building and climbed the hill past Camp Liberty and then skirted the edge of the woods that border the Smith pasture.

At the two last named places the traces of an old road are plainly visible. From the Smith, woods the road emerged near the Kelleyville school house and then followed approximately the present road to Peck's Corners, and so on to Dick Finnegan's. Here it left the present Harrietstown road but joined it again at the brook in the hollow. Here again the old road left the present one and turned to the right by Will Manning's barn. Again the two joined for a little way then diverged and finally reunited at Two Bridge Brook. From there on, the old road took virtually the course of the present stone road through West Harrietstown, passing the Noke's settlement and so on toward Paul Smith's. Near where the church of St. John's in the Wilderness now stands and where Levi Rice, the pioneer settler, once lived, the road turned north and twisted around Barnum Pond up to McCollum's, and then on to Sam Meacham's old place to the west of Meacham Lake. From here the road turned northwesterly following in general direction the East Branch of the St. Regis River into St Lawrence County. 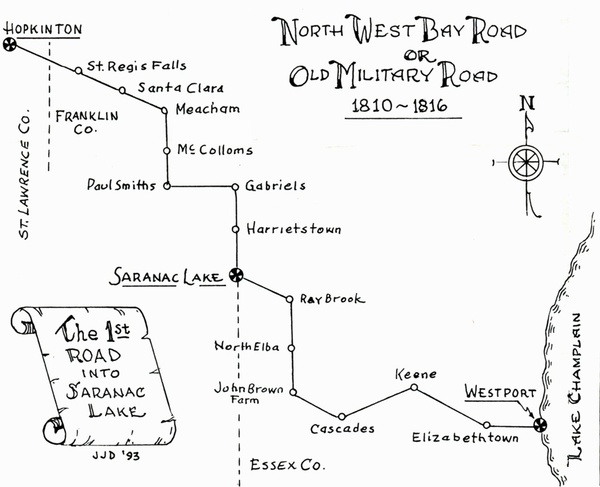 Early roads that led to Saranac Lake and the Ad'ks

A most popular early approach system to the Adirondack region was across the waters of Lake Champlain. The obvious reason for this was, of course, the comfortable travel advantage provided by the steamboat, but once the boat had reached its dock these comforts ceased. Travel overland to the interior had to be by wagon or the jolting stagecoach and what roads did exist were a far cry from what the word implied.

Raising funds for road construction in the backwoods was a major problem during the early 1800s when the distance between the hardy settler's cabin or farmhouse was completely forested. Cash was not a prevalent commodity and the legislative bodies were not overly interested in the rural betterment programs. Eventually pressure from the hinterlands brought about some state response. In Watson's History of Essex County published in 1869 he states: "Numerous appropriations, at more recent periods, have been made by the state, for the construction of public roads, which traverse the county in various directions. One of these, opened many years since, extending from Westport to Hopkinton, traversing Elizabethtown, the gorges of the Keene mountains, and the plains of North Elba, penetrated what was then denominated, the fifty miles woods." The particular project was destined to provide the first access road to what would later become Saranac Lake village.

North West Bay on Lake Champlain served as one of the prominent portals to the Adirondack wilderness area and a tiny settlement originated there in 1804 which adopted the name of the bay as its own designation. Later, when the town of Westport was formed on March 24th, 1815, the hamlet of North West Bay changed its name to Westport also. This place would serve as the starting point for our road which would be known as the North West Bay Road, or as the Old Military Road. Take your pick.

Referring to this same route H.P. Smith wrote in his 1885 History of Essex County, "A rude imitation of a road had been extended west to 'Pleasant Valley' and connected the infant colonies in Lewis, Keene, and Jay." Although Lewis and Jay were off-shoots to the north, it might be assumed that his "Pleasant Valley" was the valley of the Bouquet River at Elizabethtown and would conform to his westerly heading to Keene. In any event, this was the first leg of Watson's Westport-Hopkinton road.

Normally one might expect a military road would be built to connect two important bodies of water, like Lake Champlain and the St. Lawrence River but our road terminated at Hopkinton, some 25 miles short of the St. Lawrence. This only verifies the fact that our "Old Military Road" was not a military road in any sense of the word. It was not built by or for the military. The War of 1812 ended in 1815 and construction of the roads straddled the hostility (between 1810 and 1816) with no important relation to the conflict. So what was the pressing influence that Hopkinton held to attract some military involvement?

Only a very slight incursion took place in February of 1814 when a small British party from French Mills decided to instigate a raid on Hopkinton. A spy had informed the British that a large store of flour was being held for the Americans and was hidden in the barn belonging to Judge Hopkins. (Hopkinton was named for the judge) An early morning surprise attack disclosed that the barn held 300 barrels of flour but due to the small size of the raiding party only half of the provisions could be carried off. The remainder was left to the patriots of Hopkinton.

So much for the military, now let's return to the road's starting point at Westport. It must be understood that many of the salient sections along the route must be named to identify the locations although they did not exist at the time. So if we mention John Brown's farm, Ray Brook Hospital, or even Saranac Lake they are serving as reference points to trace the route. From Lake Champlain the road ran westerly to Elizabethtown and thence northwesterly to Keene where it crossed over a bridge and the East Branch of the AuSable River. North of Keene it swung sharply to the southwest to climb upward along the Cascade Lakes and then returned to its northwesterly course toward the Plains of Abraham and John Brown's farm. Crossing a bridge over the East Branch of the AuSable River at Intervale, a sandy hill was scaled upward past today's Uihlein Mercy Center, The road did not enter Lake Placid but continued to a point on Route 86 west of that present day village. After passing Ray Brook at Ames Mill the route left Route 86 and followed the so-called backroad from the intersection at Pioneer Village to its entrance into Saranac Lake at John Benham's in "The Pines." —As it is probably a main concern to present residents of our village a trace of the route along community streets can be made recognizable by the use of both current and historical place names. After entering the Pines at the south end of Pine Street, it continued past Jacob Moody's cabin on the left (Saranac Lake's first settler) and followed generally the Pine St. route to Baker's Bridge, so named for Col. "Milote Baker"] who ran a hotel next to the river where the stone residence is presently situated.

At this point the common, but nonfactual, nomenclature takes over as its application has been acceptable over the years through local usage. After crossing the bridge and Bloomingdale Avenue, the road climbed the hill at Old Military Estates and intersected Park Avenue at the Nichols property continuing on through Old Military Road (today's street) and rejoined Park Avenue at a point near Trudeau's gate. Passing the Smith farm the road turned sharply west around Mt. Pisgah and passed the schoolhouse as it continued on to Peck's Corners at Lake Colby.

Leaving the Saranac Lake area the road now assumes the factual name of North West Bay Road as it passes Club 86 and heads northerly toward the Finegan, Morgan, and Donnelly farms. Continuing on a northerly course the road passes through Harrietstown then northwesterly to Gabriels and Paul Smith's prior to heading north again past McColloms and at Meacham Lake it took a final heading to reach Santa Clara, St. Regis Falls and St. Lawrence County. After crossing the county line the road traveled six miles to reach Hopkinton. The total distance from Westport to Hopkinton covered some 100 miles but why it stopped there remains unexplained.

The road, over the years, witnessed many new settlements and the rustic inns which grew along the way developed into some of the area's best known resort hotels. Certainly Saranac Lake's first settlers entered the region by this route and for many years it was the only means of access. Other roads eventually were pushed outward from this earliest artery to serve the interests of widely scattered settlements.

Like Lewis and Clark's "Northwest Passage" opened our western lands the Northwest, Bay Road proved to be the thruway to Saranac Lake and the surrounding Adirondacks back in the early 1800s.