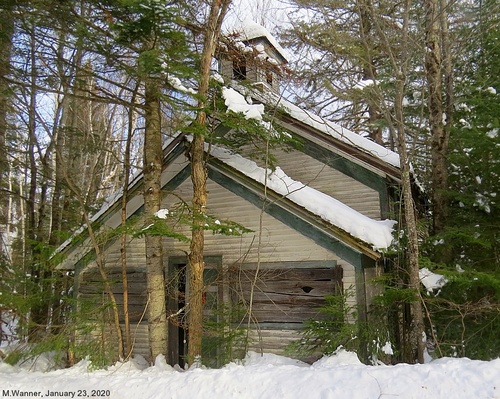 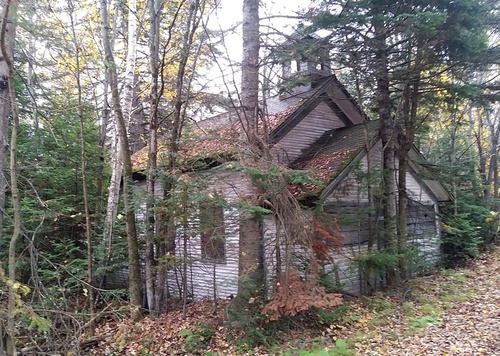 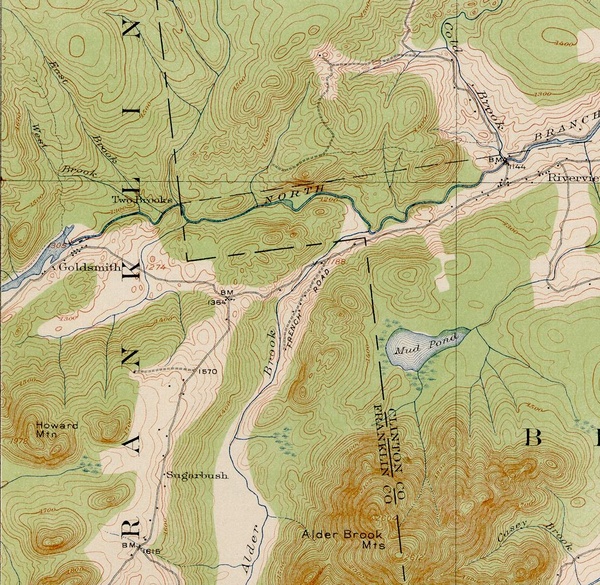 1913 USGS map detail Goldsmith is a hamlet in the Town of Franklin, on the North Branch of the Saranac River, a few miles below Paul Smith's first hotel, Hunters' Home. It was named for Thomas Goldsmith, who purchased 14,000 acres from Gerrit Smith for a bit more than a dollar an acre, and ran a large lumbering operation and sawmill there. By 1856 the business and the lands were sold and operated, off and on, by various other owners until 1916.

At its height, Goldsmith was a bustling community with a school, a post office, two hotels, a grand ball room and numerous houses. A sawmill was located on the North Branch of the Saranac River where a dam formed a small lake or mill pond extending up to Slab Bridge. The land, once logged, proved to be excellent farm land. Goldsmith was one of the first Adirondack villages to have electricity. Charcoal was an early product, made for nearby forges. The dam was blown out in 1926, and the mill closed, though farming remained vibrant, and hops were grown during Prohibition.

A forest fire destroyed the power lines, leaving the 33 existing homes without power or telephones. Few year round residents remain. Much of the land around Slab Bridge was subdivided into small one- and two-acre lots.

One teacher at the school was Gertrude Brown Hall, known as Miss Brown at the time. Also Miss Fanny Wilcox in 1899.  Also Miss Salina LaPierre of Malone in 1903. Also Martin Keese in 1906.

Clinton County Judge John H. Collins was born there in 1883.

In the late 1800's and early 1900's there was a small town in the Adirondacks which was named Goldsmith. More than 20 families lived there. In the little town there was a blacksmith shop; grocery store, hotel, post office, saw mill, narrow gauge railroad, a dam, and canal.

The blacksmith shop was used mainly to repair wagons and shoe horses. Joe Bodway was the blacksmith and he had a man who helped him.

People by the name of McKillip owned and ran the hotel and the grocery store with a post office in it. They would rent five rooms in their hotel to the people who came there to work or visit.

The saw mill was set up to cut logs into lumber. The lumber from the mill was scaled and piled by hand on the flat cars by my grandfather, Royal Tuthill. The lumber was then taken by the narrow gauge railroad to Inman Station in Loon Lake. The lumber would then be put on to the train and sent to its destination.

The narrow gauge railroad was used to run from Goldsmith to Inman Station in Loon Lake. It would run between Loon Lake and Goldsmith every day.

Today when you go through Goldsmith all you can see is the remains of a few cellars and the remains of the canal. All the buildings have been torn down or have burnt.

This was told to me by my father and grandmother.