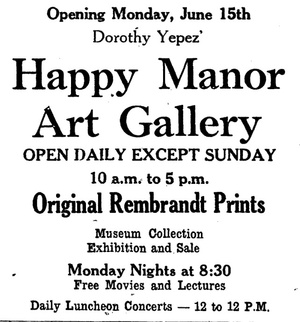 Adirondack Daily Enterprise, June 11, 1959The Happy Manor Art Gallery was founded in 1955 on the Bloomingdale Road by Mrs. Dorothy Yepes, with support from Mrs. William Morris and a group called the Adirondack Allied Arts headed by Mrs. William Distin.

We never thought we would see the time when we would welcome another organization in Saranac Lake.

But we just have to break down and do it.

Just over a week ago a group of people met at the home of Mrs. William Morris Jr. They constituted themselves, as reported in The Enterprise, into a group to be called Adirondack Allied Arts. Their purpose, as their title indicates, is to encourage, promote and support any worthwhile project which has to do with cultural activities in this area.

Their first specific purpose is to lend support to the Happy Manor Art Gallery which Mrs. Dorothy Yepez has set up on the Bloomingdale road.

We welcome this new group, which is headed by Mrs. William Distin Jr., for two reasons. In the first place, we think that any effort which seeks to raise the cultural level of our community is working in the right direction.

And in the second place, putting it quite bluntly, we think that culture pays, especially in a resort community.

It doesn't often pay the artist, or the writer, or the composer, as many can testify. But in the long run, a successful cultural program can attract more tourists than a good many events that would seem to many of us more exciting and more “attractive”. One need only think of Stratford, Ontario, where Shakespeare is played to packed audiences. Had you ever heard of the place before all the publicity about W. Shakespeare?

Or how about Tanglewood in Massachusetts where “long- hair'' music brings in more than 5000 people to a single concert, and incidentally fills every hotel, motel, cabin and guest house within miles?

Did you ever hear much about Aspen, Colorado, before a few years ago when they started the music festival there? And Aspen is miles from nowhere.

Of course, Mrs. Distin's committee is not contemplating anything of this magnitude for the immediate future. But big things often start small.

If Saranac Lake could acquire the reputation as a center of the arts, we would attract a good many city folks as regular visitors who would like to spend their Summer vacations in a spot where they can enjoy their cultural interests as well as the beauty of the scenery.

Therefore, in terms of our enlightened self-interest, we wish Mrs. Distin's Allied Arts a grand and successful future.

Nineteen participants in the All Adirondack Annual Art Exhibition will compete for prizes offered by Mrs. Dorothy Yepez, proprietor of the Happy Manor Art Gallery on the Bloomingdale Road. The competition, the second exhibit of this year, will open at the Gallery July 30 and continue until August 11. The contestants are regionally, nationally, or internationally known and the works exhibited will be on sale at prices ranging from $40 to $1,000.

Among the entries will be a work of Ray Ridabock whose art is well known in Saranac Lake where he lived for many years — where he first started painting and later conducted art classes. Other exhibitors whose work are familiar to residents of Saranac Lake are Mrs. Mercedes Herold, noted as an etcher and wood engraver, Freda Merrell who, during a career of five years as a painter, has won three awards in the National Amateur Contests in New York City; and Suzanne Tubby.

The work of Richard Colin, who will be represented In the show, is well known in Saranac Lake, remember from his One-Man Show, held at the Happy Manor Gallery in 1953. Mr. Colin has returned to the Adirondacks and is again, as last year, teacher of Art at Saranac Inn.

Many collectors of native art works own the paintings of another entrant, Jossey Bilan, born in Pennsylvania and a former instructor of art at the Old Mill School in Elizabethtown, and resident of Keene.

Others whose work will be shown are David E. Crespl, painter and ceramist; Florence Doniger; Madelein Egerer; Lawrence E. Lefevre, water colorist; Harry Marinksy, internationally noted as a water colorist and sculptor; Elizabeth Horman; Ruth C. Mould; Patrick O'Reilly; Larry O'Rielly; J. M. Parks, a Kansas artist who sells his work on the highway from a drive-in studio, and has become known for his “Monochromes” that have been developed from a specialized technique of his own creation; Steven Serbia; George Edward Williams, native of Saranac Lake, a self-taught highly regarded artist for whom painting is a hobby.

Included in the exhibition will be the sculptures of Henry Di Spirito, of Utica, who works in native field stone and granite. Mr. Di Spirito's work has been shown at the Whitney Museum, the Museum of Modern Art, the Pennsylvania Academy of Fine Art, the Chicago Art Institute and many other nationally prominent Museums. He recently won the $1,000 award offered by the National Institute of Arts and Letters,

In conjunction with the All Adirondack Annual, Mrs. Yepz plans to hang One-Man Shows: the work at Madeline Bernard and Francesco Sainz. The current One-Man Show of 13 original New York covers, done by Honka Karasz, will continue through August.

Prior to the opening of the show on July 30, Mrs. Yepez will appear over Channel 5, Station WPTZ in Plattsburgh, as the guest of Marie L. Baldwin, on Hospitality House. The program will be heard at 1:30 p.m.

The First Annual Recital of the School of Ballet conducted by Mrs. Helen Brown was enjoyed by a full house at the Town Hall on Saturday evening. The youngsters displayed much ability and the audience was amazed at the repertoire. Mrs. Dorothy Yepez, of the Happy Manor Art Galleries, was in the audience. Congratulations to all on a good performance.

Happy Manor  Art  Gallery  opening will  be  delayed  due  to illness  in the  family.  The  Film  Festival which  was to  begin  on  July  18 has  been cancelled.

However,  the  eighth Annual Art Show  for  Youth will begin  on Monday,  Aug.  1  for  two  weeks  and  will  be  followed  by  an exhibition  of  photographs by Warren Marr  II,  "Gateway  to  Freedom." Other special events  will  be  announced later.