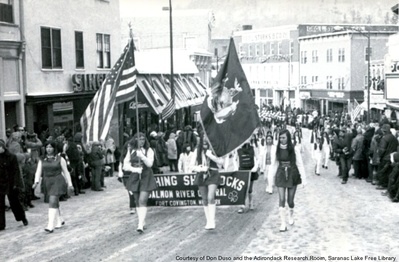 Irving Altman was born in New York City in 1900. By 1922, he was running his own ladies’ wear store in Manhattan and coming down with tuberculosis. He was told, "You want to get well? Go to Saranac Lake for six weeks." He followed this advice and took up the curing regimen at Evergreen Lodge off Catherine Street. One of the best of the private sanatoria, it was also one of the most expensive: "$45 a week — a fortune!"

While at Evergreen, Irving Altman met people who had been there not six weeks but a year — or two years: "forever". For him, getting well in six weeks turned out to mean six months at Evergreen and an additional year at Trudeau Sanatorium. By then, he felt healthy enough to open a store in Saranac Lake, which he did at 50 Main Street in Little Joe's building. The place was called, simply, Altman's. In 1925, he decided it was time to go back to the city. "I lasted three weeks," he said. He suffered a relapse and came back north.

There is a process called pneumothorax in which air is injected into the chest cavity to put pressure upon an infected lung, thus restricting its movement and thereby forcing it to rest — rest being an essential part of curing.

So, Mr. Altman went back to his store at 50 Main Street and "took pneumo" instead of going to a sanatorium.

In the winter of 1926-27 the Central Hotel was destroyed by fire. This building was built by William Hennessy in the 1890s and was immediately north of the Ayer Block which he also owned for some time. In the summer of 1928, Irving Altman and Morris Edelberg, brother of furrier Sam Edelberg whose store he managed across the street, purchased the hotel property from Hennessy's widow, Emma. (For more on Sam Edelberg, see the discussion of Hogan Block.)

In September, 1931, Altman bought Edelberg’s interest in the property, and, in 1932, he built a single story building on the 57 x 70 foot lot. The building had four narrow storefronts. He moved his ladies' apparel store into one and leased the others to a shoe shop, a beauty salon, and an electric appliance store. In the basement was Sam Sherman's billiard room. As Altman's business grew, he would displace the adjoining tenant when their lease ran out and expand into its space — knocking an archway out of the intervening wall to allow movement from space to space without the need of going outside. By 1938, Altman's occupied the entire ground floor (Sam Sherman was still downstairs), and the Altman’s slogan became "Four doors to four stores of fine feminine fashion".

In October, 1980, Irving Altman retired. He sold the building and the business to Robert Rice and William Reuben.

Mr. Altman was also an artist and an amateur magician; he taught Bob Seidenstein magic. He lived at 21 Catherine Street from at least 1933 to 1969.

Kathy Bristol writes, "Mr and Mrs Altman (Irving and Henrietta) were my neighbors for 19 years they were Great to the Baker St and Park Ave "GANG"— invites to watch his Magic and to enjoy Mrs. Altmans Wonderful homemade cookies!! We awaited Barbara their daughter to come home from the city, so we could hear her Sing!!!She sang opera and that always amazed the children in the Adks." 3/24/11

JoAnne Haig DeFoe writes, "I remember Christmas shopping at Altmans with my Dad. He took me along to help pick out gifts for my Mom." 3/24/11