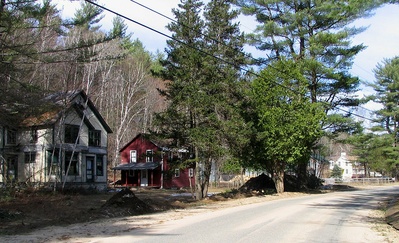 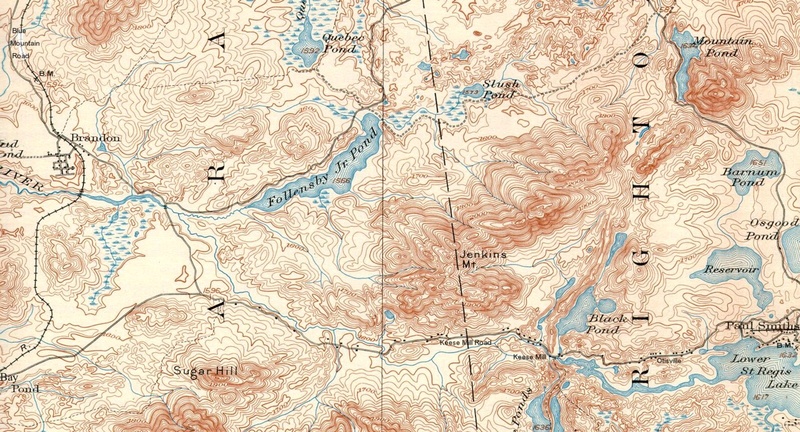 Keese Mills Road, or Keeses' Mill Road, runs from New York Route 30 six miles west past Keese Mill to Bay Pond Road. It is named for the Keese brothers, who built a sawmill in 1848 where the road crosses the St. Regis River, near the outlet of Black Pond. Keese Mills Road becomes Blue Mountain Road after the road changes to gravel, named for Blue Mountain (now called Azure Mountain) 18 miles further north. It was also called Brandon Road, for the former logging town of Brandon, a few miles north of Keese Mills.

Otisville, former home of builder Benjamin A. Muncil, is the first group of houses going west on Keese Mills Road, about a mile and a half from Route 30. The second group, about three miles west of New York Route 30, is Keese Mills itself. Between the two groups lie a former schoolhouse, the St. Regis Presbyterian Church and the road to Camp Topridge and the hiking trail up St. Regis Mountain.

The sawmill was closed around 1896, when Paul Smith bought it, took down the mill and raised the level of the dam to generate electric power, the start of Paul Smith's Electric Light and Power and Railroad Company.

The road was the home of Moses Sawyer, who guided Theodore Roosevelt during T.R.'s treks through the Adirondacks. Details of their adventures can be found in Douglas Brinkley's book "Wilderness Warrior". Mose also guided Dr. Trudeau, founder of Trudeau Sanitarium. Source

Extract From the Annual Report of the County Supt. of Highways.

The following is a description of the permanent improvements made during the past year so far as they are of special interest or worthy of mention:

Gould Hoyt "never calls the road Keese Mill Road, but prefers its historic name, the Keese's Mills Road. If you question it, he will promptly tell you the story of the Keese Brothers who owned two mills on the road." [Then shouldn't it be spelled Keeses' ? — Mary]