New York Route 30 (NY 30) is a 300-mile long state highway in central New York that runs from the Southern Tier to the Canadian border. The route connects the Catskill Park to the Adirondack Park, and is sometimes known as the Adirondack Trail. In our area, it connects Tupper Lake via Wawbeek, Saranac Inn and Upper St. Regis to Paul Smiths and thence to Meacham Pond and Malone.

The [Franklin County] Board of Supervisors

An act has been passed creating a separate highway district in Brighton and Harrietstown. Its purpose is to secure the opening of a road from Paul Smith's, passing the shores of Big Clear Pond, and joining the present highway leading from Harrietstown to Saranac Inn. The new road will shorten the distance between Paul Smith's and Saranac Inn by seven or eight miles and also make access to Big Clear Pond easier.

—It is said the road from Malone to Tupper Lake, also the branch to Saranac Lake, will be open for summer travel by July 1

The Board of Trade of Saranac Lake … has also declared in favor of the proposed State road from the Mohawk to the St. Lawrence passing through Saranac Lake village. One proposed route is from Axton to Upper Saranac Lake, thence northward along the shore of the Upper Saranac through Santa Clara to the Brighton line, and thence to Paul Smith's and northward. This route Saranac Lake village does not approve of because it only passes through the southern end of Harrietstown. If such a road is ever constructed it ought to go to Saranac lake, thereto connect with the Essex county system.

An important highway link between Saranac Lake and Tupper Lake which has been in only partial use this season will be open again with a new concrete pavement early in August.

Pouring of concrete pavement on Southern end of the new State highway from the Lake Clear fish hatchery to Paul Smiths began the past week following grading operations during the spring months.

The portion of the new pavement between the fish hatchery and Lake Clear Junction, which will replace the old narrow town macadam, is expected by Supervisor A. I. Vosburg, of the Town of Harrietstown to be completed in about four weeks

When this work is done, motorists from Saranac Lake to Tupper Lake and points south and west will be able to travel over full width macadam most of the distance to the latter village.

While the part under construction has been kept open for travel most drivers have used the alternative route by way of the Forest Home road out of Saranac Lake. This road is of town macadam in good condition.

Beyond Wawbeek corners on the road thru Saranac Inn to Tupper Lake, a State construction gang is engaged in widening and straightening the somewhat narrow road that extends from that point to within a short distance of Tupper Lake.

This improvement in connection with-that thru Lake Clear will complete the task of the State in providing a modern highway from Saranac Lake to Tupper Lake.

This route leaves Saranac Lake out Broadway and continues to Works Corners on the Harrietstown road where it turns to the left to Lake Clear Junction and "bends south thru Lake Clear and Saranac Inn.

IMPORTANT ROADS TO BE FINISHED

Saranac Inn-Tupper Lake Road Will be Done This Season

The Saranac Inn-Tupper Lake State highway, now partially closed, will be finished this season, according to information received today.

This road, which is the connecting link between Albany and Montreal via Tupper Lake, is one of the most important arteries thru the Adirondacks.

For years various organizations including the Chamber of Commerce of Tupper Lake and Saranac Lake, have been agitating this road. When completed it will make an important highway between Lake Placid, Saranac Lake and Tupper Lake…

Announcement has been made that the new concrete highway between Saranac Inn and Lake Clear Junction is nearly completed and partially open to traffic. For some little time the full width of the road will not be in use as the concrete on one side is still drying. This route is part of the new construction between Paul Smith's and Saranac Inn station. The link just finished is on the main highway between Saranac Lake and Tupper Lake by way of Work's corners and Lake Clear. It is planned next summer to extend the concrete construction from Lake Clear to Paul Smith's. An overhead crossing is planned for Lake Clear Junction. 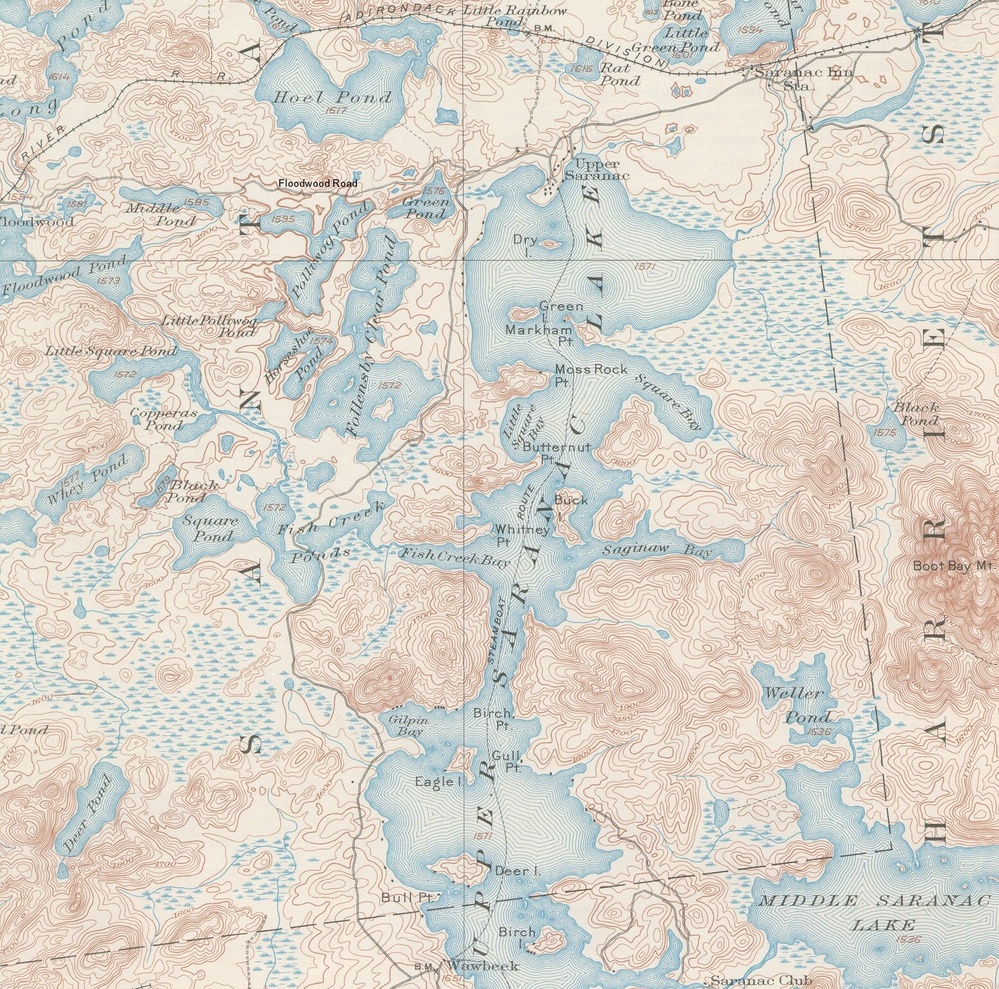 1905 USGS map showing the road that would become NY 30 running along the west side of Upper Saranac Lake. At the time, it was a dirt road, apparently no bigger than Floodwood Road. 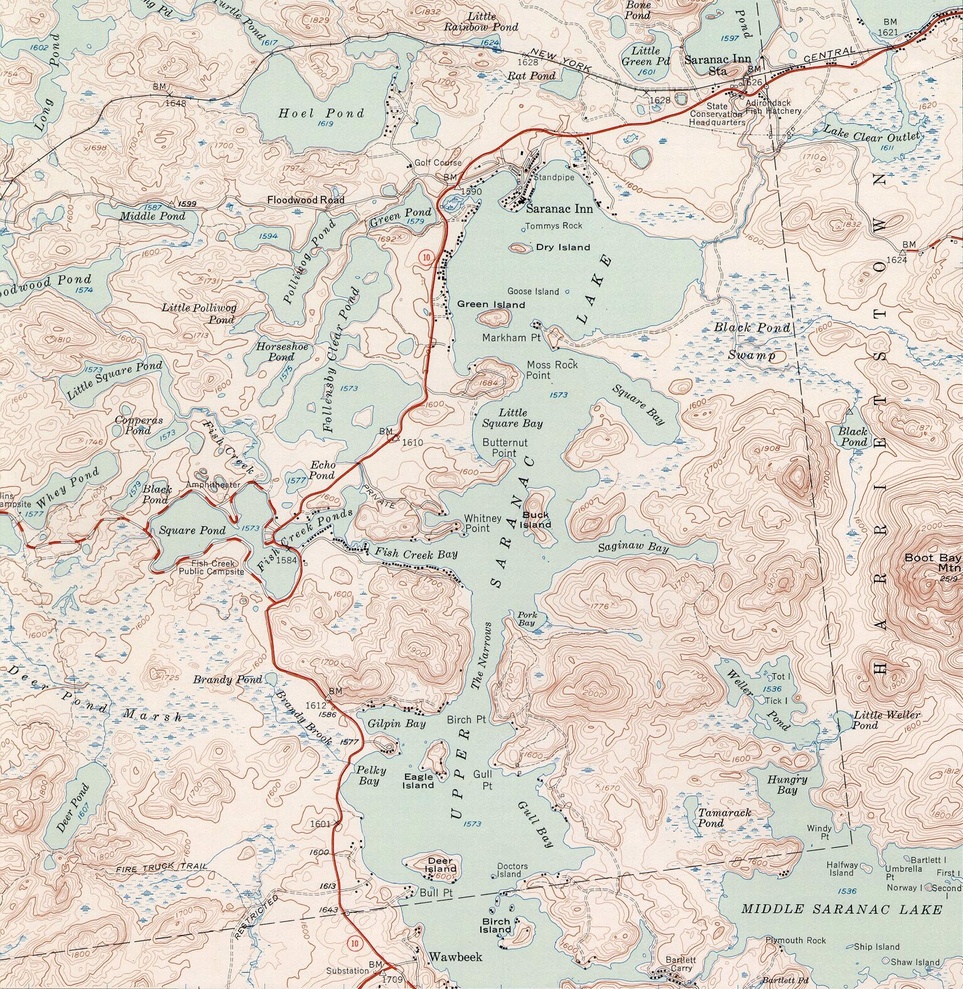