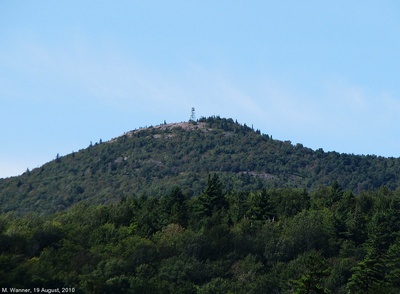 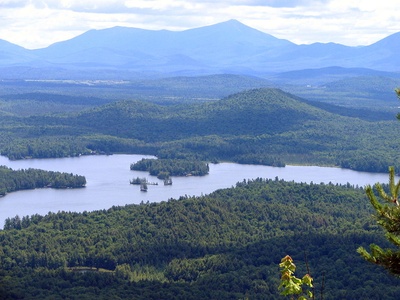 The view east from St. Regis Mountain, Upper St. Regis Lake in the foreground, Whiteface Mountain, right of center on the horizon. 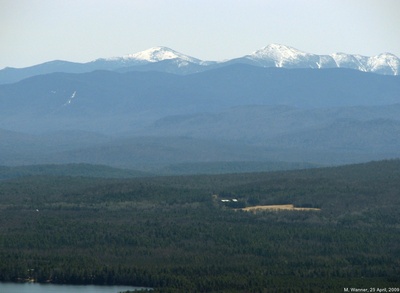 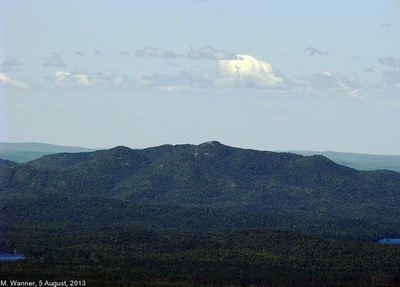 St. Regis Mountain from McKenzie Mountain, sixteen miles to the east. Saint Regis Mountain is a 2874-foot mountain at the center of the St. Regis Canoe Area in the town of Santa Clara.

It can be climbed from a trailhead on Keese Mills Road west of Paul Smiths, or from a trail that starts at a landing on Upper Saint Regis Lake just south of Camp Topridge, a Great Camp built by Marjorie Merriweather Post. 1 The view from the summit includes thirty lakes, including the Upper and Lower Saranac Lake, and Upper and Lower St. Regis Lake. 2

The summit is bare rock, having been cleared by a fire started accidentally by a surveying party led by Verplanck Colvin in 1876. There is a fire tower on the summit that was restored in 2016 and is now open to the public.

This shows the view to the east northeast from St. Regis Mountain, c. 1905. The house at lower left in the photograph above is at lower right here. The compound that predated Topridge is in the center foreground. The two ponds at lower left, below the esker, are known as the Spectacle Ponds. The water above the esker is the northernmost arm of Upper St. Regis Lake; above that is Spitfire Lake. In the center left is Lower St. Regis Lake with Paul Smith's Hotel on the far shore. At the far left is Osgood Pond, and above the hotel is Jones Pond. Library of Congress External links