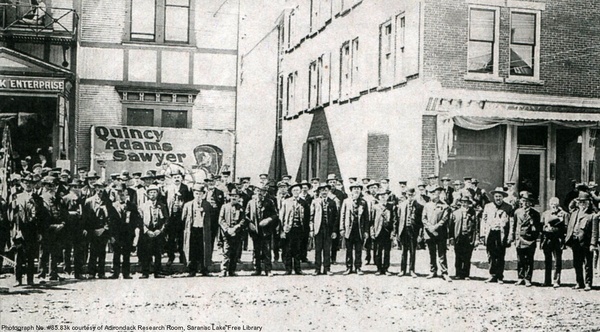 On Memorial Day 1905, local Civil War veterans at a meeting of Francis M. Bull Post No. 621 of the Grand Army of the Republic held a parade and were photographed outside the Harrietstown Town Hall by William Kollecker. This photo was given by Alfred A. Moody. While they are not individually identified, among the veterans shown are "Comrades Flanders, Peck, Walker, Foster, Shea, Baker, Cronk, Munn, Segua, Paye, McNulty, Blinn, Hatch, Daniels, Slater, Hathaway and Morton." The late Betty Pratt, a volunteer in the Adirondack Collection of the Saranac Lake Free Library, made an extensive study of local Civil War veterans in 2001. Her typescript lists the names of all the men whose service was documented from any source, including gravestones and census records. From this we can learn the first names of some of those listed, including Henry McNulty, whose service record notes that he was "away in the woods." Adirondack Daily Enterprise, September 24, 2011 Post 621 of the Grand Army of the Republic, also known as the F.M. Bull Post, was an organization of Civil War veterans from Saranac Lake and Lake Placid. It was named for Francis M. Bull. An adjunct organization for women was called the Women's Relief Corps. The earliest mention in local newspapers is from 1897. It disbanded in the 1930s.

G. A. R. veterans and friends from Saranac Lake and Lake Placid will gather here tomorrow to observe Memorial Day services under the auspices of the local relief corps.

They will be met as a body at the railroad station by the local W. H. LaMoy Relief Corps and the Lake Placid band. Dinner will be served at noon at the Methodist Church followed by a patriotic service. At the conclusion of the service an interim of social discourse will be enjoyed, and a supper will be served at 5:30 preceding the departure of the visiting veterans and friends.

With few of its original members and little need remaining for its services, the F. M. Bull Post of the Women's Relief Corps of Saranac Lake is about to disband.