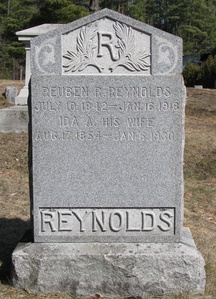 Reuben R. Reynolds was a well-known guide, and one of the early residents of Saranac Lake. It was in his home at 68-70 Main Street that Dr. E.L. Trudeau spent his first winter in Saranac Lake. In 1906, Reynolds sold his property on Main Street to W. S. Fowler "and a syndicate of gentlemen" in 1906 for $10,000; they had plans to "erect thereon a business block containing three department stores". 1

He was the son of Newell Reynolds, one of the earliest residents of the village. In 1886, he was sued, along with his siblings, by his brother Ransom Reynolds, to force a division or sale of his father's farm. 2

Mr. TITUS of Middletown, Ohio, died at REUBEN REYNOLDS'S on Thursday the 19th inst. He had been ill with consumption for several years, spending a winter in this place three or four years ago, and being very low at that time. Last fall he returned, and has been near to death at different times through the winter. It was a homeward journey for the widow and son.