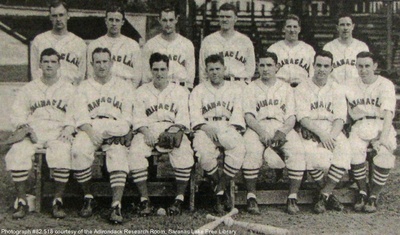 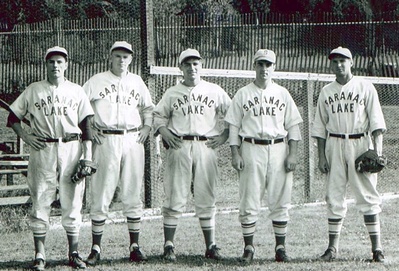 Saranac Lake Red Sox, c. 1940. James C. McClanahan, far right. The Saranac Lake Red Sox was the local semi-pro baseball team in the 1930s. They played in the Northern League, that included teams from northern New York and Vermont. Saranac Lake's Municipal Field (Ken Wilson Field), had a large wooden grandstand behind home plate and bleachers on both baselines. The Saranac Lake team played for good sized crowds, who would come to the ballpark early to get a good seat; others watched from blankets beyond the bleacher sections. Families would have picnics at the ballfield while watching a game.

Following is a great baseball story by Walter "Bud" Duffy.

James C. McClanahan was born in Hartsville, Tennessee in 1917. Then known as Cliff, he pitched for the Oglethorpe College in Atlanta but in 1940 he pitched for the Saranac Lake Red Sox. He was subsequently on the U.S. National Team that went to Cuba for the World Tournament. Bill Hafer was the manager. Cliff was paid $130 per month and his way to Saranac Lake was paid for him. Bill Hafer was later Principal of the Saranac Lake High School following WWII. Cliff's children remember him telling a story of watching a baseball game with Babe Ruth in 1939 or '40.