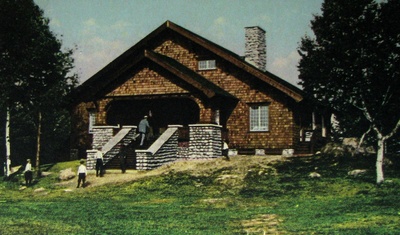 St. Regis Golf Club, c. 1915 The St. Regis Golf Club was on Keese Mills Road in Otisville. It was a nine hole course constructed by Paul Smith some time after 1858 for the guests of Paul Smith's Hotel. There had been an earlier hotel golf course that was located on Osgood Pond, but was too sandy and too far from the hotel to be satisfactory. The golf house located at Osgood Pond was used by local boy and girl scouts in 1932.

Local residents remember seeing boats from the camps on the St. Regis Lakes coming down the St. Regis River and stopping at docks near the seventh green; the golfers would blow their horns and the caddies would leave the clubhouse and go and haul the players' golf clubs up the hill.

In the winter, local children used the golf course for a ski area; the number two green had a hill that came down to Keese Mills Road that was their favorite place to ski.

Emil Block, a pro golfer, ran the golf course and taught golf. At the clubhouse there was a bar and a pro shop. There was a nice golf house there at one time, that has recently been torn down by Paul Smith's College.

At one time they started to build an 18 hole golf course that was later abandoned. A large pump brought water up from the St. Regis River to water the course.

The golf course was in use for 54 years; it was closed in 1949. When it closed, the college built a ski tow at number two green that was still running in the late 1940s that was run by Ralph Blanchard for two or three years. Later, the ski tow was moved to Jenkins Mountain; the road to the Visitors Interpretive Center is the road led to the ski tow.

A sign on the Adirondack Visitor Interpretive Center's Silviculture Trail said something like "the spot you are standing on used to be a fairway on an abandoned golf course." . . . Gould Hoyt, a teacher for many years in the forestry department at Paul Smiths Collage, had planted tiny trees on the abandoned fairways back in the '50s. . . .  He showed me old maps, and old aerial photographs of the area, taken before his tiny trees were planted, where the outlines of the fairways were clearly visible. Current aerial photographs showed darker spots, because the open spaces were planted with trees that stayed green all year round.

Gould and his wife, Ruth, had also found a magazine article from 1931 which had three photographs of the then-newly created open fairways, and one of a bridge that was built to join a green and a tee. The Hoyts, through their work with the Paul Smith's Museum, were most helpful in searching out information and artifacts from that time, such as a golf score card, with the names of nine different fairways labeled, and another with Richard Longtin, Emil Block, and Phelps Smith's golf scores listed, hole by hole.

Professor Mike Kudish drew a map of the territory. All together, within five miles of the old hotel, there had been three golf courses, but they assumed that only two were actually used. One of the courses had a club house that was still standing in the seventies.

Most first hand information was destroyed in the two major fires which consumed the hotels on the current site of the college. . . .

John McKay, a PSC student, wrote a senior paper on a proposed interpretive trail for this abandoned golf course, and he created maps on his computer, using old aerial photos scanned into the college's ArcView Geographic Information System. With his understanding of the game of golf, study of the only two remaining open fairways, and first hand viewing of the planted fairways, he theorized the layout of an 18 hole course, off the north side of the Keese Mills Road, which began and ended near the site of the old hotel. This may not be the actual story, but it is a possible story.

Access is easiest from the Keese Mills Road entrance to the Visitor Interpretive Center's Silviculture Trail. The access road crosses two former fairways and encircles another. The trail head brings you up to another fairway (called a dogleg) near the top of the first hill. The overlook site on the Silviculture Trail, as you descend toward the parking area, was the site of one of the bridges built to accommodate the golfers who would be teeing off towards a large fairway on an adjacent hill.

An Ill-timed Dream (sidebar to the article above)

The first of the three courses was built on the west side of Osgood Pond, and abandoned due to poor soils; the second, nine-hole course was contiguous with the hotel with fairways on both sides of Keese Mills Road.

From a "senior capstone" research project by Paul Smith's College graduate John McKay: In 1931, under the management of Phelps Smith, the third Paul Smith's golf course was built, using one of the country's first gas and air shovel buckets, highlighted in an April, 1931 article in "The Excavating Engineers." This course consisted of 18 holes, and began and ended at the site of the Hotel. Emil Block was the Superintendent of the Golf Course, and was pictured in the same article, standing on one of the open fairways. This golf course was not used by the public, and during the past fifty years open fairways have been planted with several varieties of trees, including white pine, red pine, Norway spruce, black spruce, and Japanese larch.

Ruth Hoyt of the Paul Smith's Museum concurs this 18-hole "river course" was never completed. One man who summered in the area recalled that the course, begun during the onset of the Great Depression, was abandoned before it was finished.

Did you know we have a campground?

by Andrea Urmston '89 and Russell Wagner '05

Yes! The Paul Smith's College Alumni Campground is open to all alumni and is located on Keese Mills Road, past the horse barn, just under a mile from the main entrance. It is open between May 1 and October 31 and consists of 7 lean-to's, 22 tent sites, and 4 RV sites. Primitive in nature, the campground offers a natural setting free from electricity and running water, but serves up some of the best views on Lower St. Regis Lake.

During the era [of] the Paul Smith’s Hotel, the property where the campground is located served guests as an 18-hole golf course. Evidence of the golf course still remains today; tent sites 10 and 99 were former holes on this course. . . .