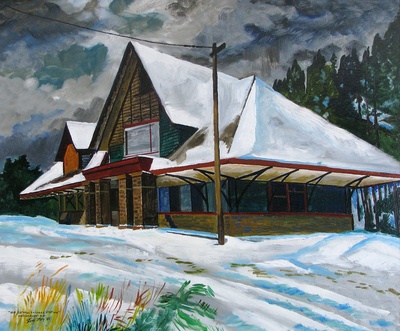 Stephen Story relocated to Saranac Lake from New York City in the late 1970's, after spending many summers in the region. He was a notable painter and restored artwork for prestigious organizations such as the National Gallery of Art in Washington, D.C., the New-York Historical Society, the Museum of Natural History and the Metropolitan Museum of Art in New York City. His skill was applied to works by Botticelli, Whistler, Rembrandt, Monet, Cezanne and van Gogh. Oil paintings of the Adirondacks by Arthur Fitzwilliam Tait and Mrs. W. Averill Harriman's French collection also benefited from his care and expertise.

Mr. Story lived at 1 South Fairview Avenue. He restored paintings in the basement on a large table which remains there today.

An exhibition of 40 paintings by the late Saranac Lake artist Stephen Story (1915-1988) will open Wednesday, Aug. 22 and run through Sept. 10 in the Fine Arts Gallery at the Lake Placid Center for the Arte.

The show was made possible through the efforts of the artists daughters. Mrs. Peter (Jennifer) Blumenfeld of New York City and Mrs Clyde (Roberta) Walton of Bronxville in cooperation with the Lake Placid Center for the Arts.

A native of Brooklyn and a graduate of Pratt Institute, Story began restoring paintings for the Metropolitan Museum of Art during the depression. He established himself over a 47 year period as a preeminent restorer of fine paintings. He preserved priceless works of art for major museums in New York City, and for private galleries and collections, such as the Rockwell Kent Legacies in AuSable Forks.

Among the paintings he restored were works by Rubens, Hals, and Rembrandt, as well as Van Gogh, Monet, Winslow Homer, and Edward Hopper.

The care for his work extended even to the framing of his paintings. He insisted on the finest of frames. He was an expert in matching the painting to the frame, so that the frame enhanced the work and yet does not detract from its aesthetic quality.

Story's paintings show an interesting blend of traditional glazing techniques and contemporary thinking. While he was influenced by many of the artists he restored, his work has significant ties to the Impressionists. He depicts specific settings of the region and captures the light and mood of the area, thus making him truly an Adirondack artist.

He spent many summers with his family in the Adirondacks. After permanently moving to Saranac Lake in 1976, he painted full-time the landscapes and village scenes of this region until his death in 1988. He left a legacy of over 200 paintings.

His realism is not merely a photographic copying of what he saw, but an interpretive rendering of the setting. In doing so, he captured the ever changing climate, with its extreme temperature ranges, its sudden cloudbursts, unexpected fogs, or again sunny blue skies dotted with white clouds.