There are four schools, housed in three buildings, in the system: the high school on LaPan Highway in Saranac Lake, Petrova Elementary and Middle School on Petrova Avenue, and the third building is Bloomingdale Elementary School on West Main Street in Bloomingdale. Formerly part of the District were the Lake Colby School on Trudeau Road in Saranac Lake and the Lake Clear Elementary School on Route 30 in Lake Clear. The Lake Clear building  was closed in 2009; the building is rented to the Adirondack Medical Center, while the playground is still available to the community.

In 2000 the total student population was about 1,710, with 560 students in high school, 480 in middle school, and 670 in elementary school. The school bus depot on Route 3 housed 24 school buses in 2000, and traveled a total of 430,000 miles that year. The district had 163 teachers, 19 teacher's aides, 92 support staff and 11 administrators. The seven members of the Board of Education are elected; terms have recently been reduced from five to three years.

In 2013, the Saranac Lake Central School District enrolled a total of 1,300 students. Of those, 164 students (12%) were in special education, according to the Adirondack Daily Enterprise, October 2013.

From Howard Rileys' column in the Adirondack Daily Enterprise, December 10, 2011, quoting the Enterprise of December, 1958:

The centralization meeting was called to order and presided over by Ward Leahy, representative of the Lake Colby School Board.

The group, after many meetings last year, will prepare a final report to the constituent groups.

Voters From Twenty School Districts To Decide on Centralization Tomorrow

Voters from twenty school districts will go to the polls tomorrow to decide if they want to join together in a centralized school district centered in Saranac Lake.

Area residents had a final chance last night to have their questions on the subjects answered over a marathon radio program.

The program, under the direction of the Steering Committee on Centralization lasted over two hours as calls came in from all over the proposed district. The final session in the Saranac Lake High School Auditorium marked the last step in one of the most urgent and intensive community campaigns in recent years.

The effort to prepare the voters for an informed and thoughtful decision in tomorrow's centralization vote has been largely carried on through the work of the Steering Committee, which consists of representatives of every district in the proposed central district. The thirteen member board, joined by Saranac Lake Superintendent of Schools Robert L. Workman, and county representatives Harlie Smith and Claude Clark, have studied the state education department's plan for centralization.

With all the details at their command, the Steering Committee and the Saranac Lake school board went to each district last week to explain to voters the "dire need," financially and educationally, for centralization of area schools.

Last night's meeting was successful in answering questions that were called in from Lake Colby, Lake Clear, and other areas.

The urgency of centralization is indicated by the concern and concentrated effort so many area people have put into the weeks proceeding tomorrow's vote. Brochures explaining the financial and educational picture, with and without centralization, were passed out to most houses and apartments in the entire proposed central district.

A citizen of the United States, 21 years of age or older and a resident of the district for 30 days before Friday's vote.

Any questions on voter qualifications may be directed to the superintendent's office at the Saranac Lake High School. The Phone number is 891-4221.

Voting will be held tomorrow from 2 to 7 p. m. in nine locations. Harrietstown North Elba, St Armand and Santa Clara will cast votes in the auditorium of Saranac Lake high school.

At Gabriels Schoolhouse will be Districts No. 4, Brighton and Santa Clara.

The votes will be counted at the central polling place, the Bloomingdale schoolhouse, following the closing of the polls at 7 p. m., in the various school houses.

Tomorrow, the voters will be asked to make a decision on centralization of the 20 school districts which make up the Saranac Lake area.

Anyone who has had any desire to become informed on the subject has found plenty of information. In fact, there has been a flood of it in recent weeks.

Today, we print a picture page on the condition of the Saranac Lake schools in an effort to communicate why centralization is so urgent.

Centralization is a means to an end. Although the approval of centralization does not automatically give anyone the right to build, what makes this so important now is that in Saranac Lake, the building situation is deplorable.

A citizens' committee last year found that the two elementary schools were in such bad condition that it would be better to junk them than try to repair them. They also found that major repairs were needed in the high school.

Boiler rooms are overcrowded and dangerous; stairways are too narrow and could mean children trapped in a tinderbox of an old building if fire ever broke out.

Classrooms were found tragically small; the heating and ventilation is so bad in some cases that students sit in class half asleep and are not receptive to learning, and some have even been caused respiratory illness by the situation.

The library in the high school is so inadequate that its use becomes a farce; books must be thrown out for lack of room; students are limited in use of the library for lack of space and those there are jammed in shoulder to shoulder.

The lavatories in some of the schools totally lack any privacy for the young children and although kept clean, they are in decrepit shape. Most indicative of the entire situation are the two sinks for 200 children at the Broadway School.

We pay the money anyway, to the state through income taxes rather than locally through real estate taxes, but there is no point in paying twice. As the chart on the picture page shows, centralization is going to bring a lower tax rate locally.

The outlying schools suffer from some of the same problems with physical plants; the good schools, such as the ones at Lake Clear and Lake Colby will be kept. But all of the students go to the high school anyway, and if centralization does not come about, the outlying districts are going to face catastrophic raises in tuition. Call it blackmail or anything else—it is a necessity.

Taxes and buildings are the bread and butter of the issue, but the real reason for centralization is to provide better education for the children. In many cases, plant reflects on this—clean, roomy, airy classrooms are a much better environment in which to learn.

Bringing the smaller schools together will also mean an interchange among teachers and a greater variety of facilities which will benefit the students.

Centralization is urgent; and it deserves your support.

The Board of Education of Central School District No. 1 of the Towns of Harrietstown, et al, hereby invites the submission of written sealed bid purchase offers for the following school properties:

TAKE NOTICE that the submission of bids and conveyances of properties will be upon the following terms and conditions:

1. Bids will be received at the office of the School District Clerk, Petrova School, Saranac Lake, New York, 12983 until 3:00 o'clock P.M. on August 25, 1971, at which time and place all bids will be publicly opened. Check for the full amount of bid payable to "Saranac Lake Central School District No. 1" must accompany each bid.

2. Sealed envelopes most be clearly marked "School Property No. 1"

3. Checks will be promptly returned to unsuccessful bidders.

4. Conveyances to successful bidders will be made only by QUIT-CLAIM DEED. The Board of Education shall convey only such right, title and interest it may have in the said properties, if any. Bidders are advised to determine title at their own responsibility and expense prior to submitting bids.

5. Properties will be conveyed "as is" at date of deed. Deed descriptions will be only according to deed records presently known to the Board of Education.

6. The Board of Education reserves the right to waive bid formalities and to reject any or all bids.

Board of Education By: Eleanor K. Munn, Clerk

The bids on eight unused Saranac Lake school system buildings were opened yesterday and after a special meeting, the board of education announced the following sales:

Easy Street School to Cantwell and Cantwell of Malone for $5,651;

Corey's School to LeRoy and Sally Pickering of Tupper Lake. $3,655;

From an article by Diane Chase in the Adirondack Daily Enterprise on December 2, 2009, titled "A life of medicine: Dr. Leonard Bristol": Dr. Bristol spent 16 years as a member of the Saranac Lake School Board, 13 years as president. During his tenure, the school district was centralized. "It took several years of hard work by the board to accomplish centralization. Gabriels, Lake Clear, Onchiota, Vermontville and Bloomingdale were just some of the towns that had small schools at that time. By the time the new high school was built, I felt it was time to move on." 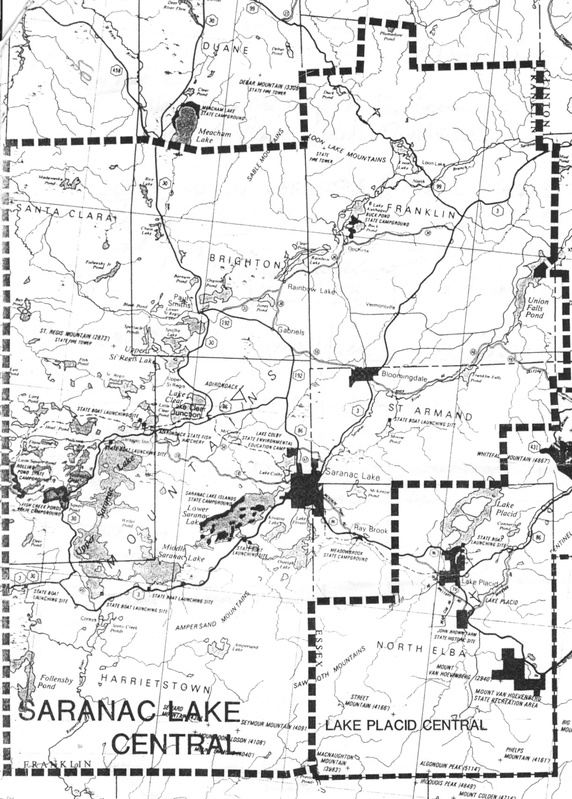 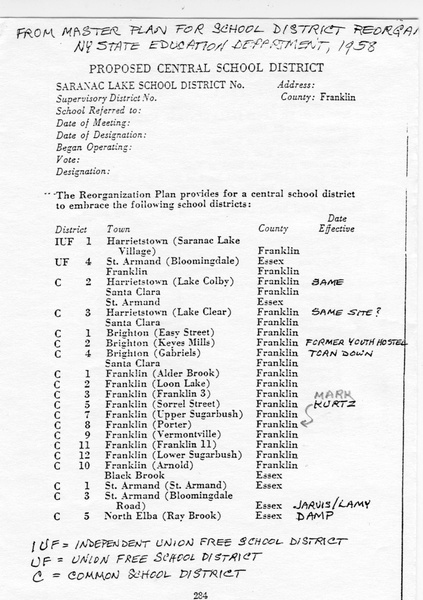