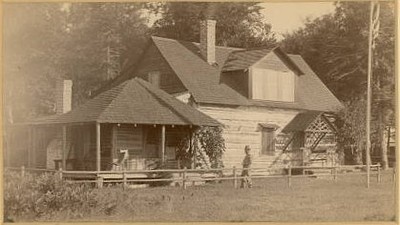 The Cottage owned by Thomas Blagden that preceded the Saranac Inn; US President Grover Cleveland used it for his honeymoon in 1886. (Photo by Seneca Ray Stoddard)

Properties owned by Thomas Blagden near the Saranac Inn, 1912 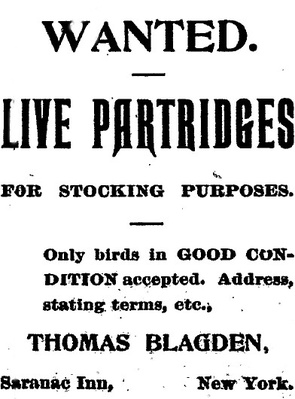 Thomas Blagden was an early landowner of the Saranac Inn region, having owned great tracts of land and built many of the earliest camps on the lake.  He also founded a boys' camp, La Jeunesse, on Fish Creek.

Born in Washington Oct. 18, 1863, Blagden was educated in the public schools there. He came to the Adirondacks in 1870 and opened Camp Alpha, first of a series of lodges in the upper Saranac Lake area.

The advertisement of THOS. BLAGDEN, of Saranac Inn, for live partridges, which appears in another column of the PALADIUM, is one of many evidences that a new and better spirit is developing among sportsmen, whose motive has long been to kill, kill, kill without thought for ultimate consequences. Therefore the fishing and hunting in many localities have been destroyed, and a principal attraction of the wilderness sacrificed. Entire species of wild animals have been nearly or quite exterminated while in the process the genus, the human hog, has thrived and multiplied. Happily, however, many men have been of late taking thought for the morrow, and while these continue to kill in moderation they; provide for replenishing also. Such work as Mr. BLAGDEN apparently contemplates supplemented by a decent observance of the game law, will go along way to keep the Adirondacks a game section, and to make the business of hotel keeping and of guiding profitable. A good part of the money brought into the county in this way finds a wide distribution, and accomplishes a general benefit. Tradesmen get it, and market gardeners and poultry fanciers especially share in it. Stocking, both as to fish and animals, should go hand by hand with killing.

Takes the Famous Cleveland Cabin at Saranac Inn for the Season

Chief Justice White of the United States Supreme Court has rented the cottage adjoining Saranac Inn, at Upper Saranac Lake, which is owned by Mr. Blagden and for a number of seasons was occupied by President and Mrs. Cleveland. The cottage is picturesquely located in the woods with an extensive lawn which affords a view of lake and mountain scenery.