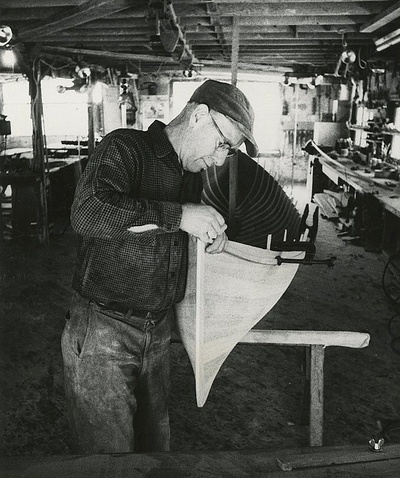 Willard Hanmer working on a guideboat in his shopin Saranac lake, 1961
Courtesy of the Adirondack Experience
Born: 1901 1

Willard J. Hanmer was a master guideboat builder; he was the son of Theodore J. Hanmer. As a child, he began working in his father's boat shop about 1910, sticking tacks, caning seats and sanding hulls. He built his own shop in the 1920s, and lived nearby at 202 Lake Street. Carl Hathaway apprenticed with him for two seasons, and bought the boat shop when Hanmer retired. Since the house and the shop were subdivided, the shop now has a separate address on Hanmer Avenue. Chris Woodward, who studied guideboat building with Carl Hathaway and Ralph Morrow in the North Country Community College guideboat-building class in the 1980s, purchased the property from Hathaway and works there now.

The Willard Hanmer Guideboat Race, held annually since 1962, is named in his honor.

1. According to his tombstone in Pine Ridge Cemetery. Hallie Bond's book gives his birth date as 1902.