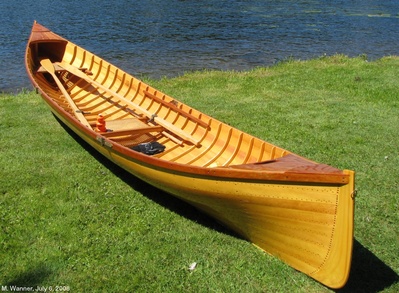 A guideboat on the shore of Lake Flower, at the 2008 Willard Hanmer Guideboat Race

The Saranac Lake region was home to a number of men who built the famous Adirondack Guideboat, among whom are:

Contemporary guide and Enterprise columnist Joe Hackett writes: "While no single builder can be credited with the invention of the guideboat, the design was perfected by local craftsmen such as [Willard and Theodore] Hanmer, Martin, Billings, Rice, Vassar, Morrow and Hathaway. It is a tradition that continues with local builders such as Woodward, Frenette, Doyle, Duprey, Cameron, Reynolds and Spadaro." 1

Searching out the roots of the guideboat

The man sat on a log and wiped the sweat from his brow. He was taking a break while hauling his heavy skiff across an Adirondack carry from one body of water to another. He could have been a trapper, a hunter, a fisherman, or a guide and in many such instances he was probably all of these.

While resting, he must have thought that there had to be a better way.

Did such pondering lead to the conception of an idea whereby a much lighter craft could replace the skiff and dory? If so, would the reverie eventually develop into a concept leading to the creation of the Adirondack guideboat?

Unfortunately, there is no precise date as to when the guideboat came into being, nor is there any record which credits one man with its invention. Obviously, the dire need for a versatile craft would supply the incentive for a breakthrough. Kenneth Durant, an authority on the subject, claimed that the boat was not invented but that it simply "evolved." On the other hand, Charlie Keough, an expert in his own right, insists that a single individual had to first germinate the idea. If Charlie is correct in his reasoning, the historian, Donaldson, would place the laurel on the brow of Mitchell Sabattis, the renowned Indian guide of Long Lake. Naturally, other areas claim the honor for their own favorite sons. William Allen Martin of Saranac gained much fame for the lightness of "Willie Allen's eggshells," while Caleb Chase of Newcomb received credit for building the first "double-ender."

First notices of the so-called little boats appear in the writings of the early journalists who came to the Adirondacks during the first half of the 19th century and marveled at the narrow boats which could be easily shouldered over the carries.

One author, the Rev. John Todd, in his little book entitled "Long Lake," tells of his first introduction to the craft during a visit to the lake in 1841. Upon his arrival "two young ladies sprang into a little boat and rowed around the lake to let the families know that a minister had arrived." Although he did not identify them, the two girls might very well have been the daughters of the fabled Sabattis. and the "little boat" could have been a forerunner of the guideboat. Since Mitchell was also a lay preacher, it might be fair to assume that he would greet Rev. Todd.

On his second trip to Saranac Lake, in August of 1842. Todd "procured a little boat, such as one can carry on his head through the woods, from river to river, and from lake to lake. Our course was up the Saranac waters, through its beautiful lakes." Passing over the Indian Carry into the Raquette River, the party once again made for Long Lake where the first little boat that they met contained Mitchell Sabattis.

The Street, Headley, and Hammond books of the mid-1800s also mention these little boats but offer little in the way of definite description. One opinion, put forth in an article by George Bixby in 1881, sheds a little light on the subject by stating that "the Saranac boats are very light and cranky, and it is a saying that if you get into a Saranac boat, you should have your hair parted strictly in the middle."

Guides had a strong impact on the designs because they had to carry the boats and they were the builder's best customers. Many of the builders were guides themselves.

To avoid the solid weight of a skiff or dory, it was necessary to experiment with a skeletal frame sheathed with light but strong material. The frame consisted of a bottom board with ribs that were bent or steamed to fit an outer shell.

Ribs that were bent had a tendency to warp which resulted in a distortion of the hull. An alert Adirondacker noticed that an uprooted spruce tree disclosed a natural crook where the root grew out from the base of the tree. Here was a strong and resilient piece of wood in a shape that required no bending.

What it did require was arduous labor for harvesting. A sizable spruce tree had to be found and cut down, leaving about two feet of trunk. The roots had to be dug out and cut by hand. Then, the roots had to be cleaned and dried and sawed into slabs that followed the natural crook of the root.

From these "knees" of curved wood, the ribs could be shaped without bending. The ribs were then fastened by screws to the bottom board. The early boats were of lapstrake construction which meant that each individual plank or strake overlapped the one beneath it in a clapboard fashion.

These first boats had a pointed bow and a stern in the shape of a wine glass. All of the early illustrations in the Adirondack guide books and adventure stories depict this style of craft. With a supporting back rest the patron took his seat in the stern while the guide rowed from the bow.

The next series of innovations brought the guideboat to its final configuration. To eliminate drag, builders beveled the outer lip of the lapstrake, giving the boat a smoother surface. The strakes were planed to a feather edge and brought together with glue and copper tacks to form a completely smooth skin fastened to each rib by brass screws.

The square stern presented difficulty when shoving off or backing water, so why not have the boat pointed at both ends? With a sharp stern both fore and aft, the craft could be easily propelled in either direction. The standard boat was usually 15 or 16 feet in length and weighed 60 to 75 pounds. A small deck was installed at each end; three caned seats, a pair of oars and a carrying yoke completed the assembly. Oar locks were provided at the bow and middle seats so that the boat could be rowed from either position. With one or two passengers, the guide always rowed from the bow seat but when alone, he rowed from the middle position. The finished guideboat contained well over 4000 tacks and 2000 screws! The end result was not only a superbly designed workhorse but also a thing of beauty.

The famous Adirondack guideboat builders were in a class by themselves. They were skillful artists possessing a highly advanced talent in the technical sense of refined carpentry. Each builder kept his own set of patterns which reflected his individuality and clearly defined the lines and style of his craft. Any knowledgeable guide could recognize the maker of a boat by identifying both appearance and performance and, for reasons of his own, would favor one builder over another.

Over the generations, there was a host of builders to choose from. In addition to those already mentioned, there were, among the better known, some entries from each community. Saranac Lake could boast of Fred Rice, H.K. Martin, William McLenathan, and that master builder Willard Hanmer who learned the trade from his father, Theodore. Long Lake had Warren Cole, Reuben Carey, and the Austins, while Boonville had Dwight Grant. Bloomingdale listed William Vassar and G. Ricketson while Albert Billings built in Lake Placid, and Raquette Lake was represented by the Blanchards. There were, of course, many more.

A unique method of launching his boat from shore or a boat ramp was perfected by the more agile guides. With about three quarters of the boat's length in the water he would steady the craft until his passenger was seated in the stern. The guide would then grasp the gunwales above his seat and push off with one foot, vaulting in between his arms to land lightly in his seat. The momentum of the shove would carry the boat out into deeper water.

Willard Hanmer related a humorous story about himself. His boat was on the inclined ramp at the old Algonguin boathouse and after seating his client in the stern seat he said, "Now I'll show you how we launch a guideboat." Grasping the gunwales he gave the boat a mighty push but just then his foot slipped on the wet ramp and he wound up sitting in the water. He did manage to hold onto the boat and without another word he climbed into his seat and grabbed the oars. His passenger innocently remarked," Well that's all very nice but isn't it a bit uncomfortable?"

There are several fine local builders who are carrying on the tradition. Carl Hathaway, who took over the Hanmer boat shop, Ralph Morrow of Duprey Street, and James Cameron on St. Regis Lake will take your order for a custom built boat. Should you wish to own one of these classics just be sure that you secure a sound footing when you push off.