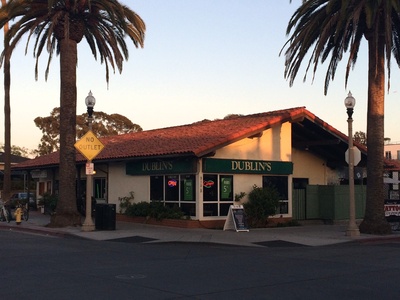 Dublin's is a sports bar and restaurant. It is in the location that was once the first Rusty's Pizza (which started as Rusty's Roast Beef). There's a rumor that underneath the paint on one of the walls, there's a 1980s mural of Jesus eating pizza with his disciples.

Riccardo Fundament opened Dublin's in spring 2002, serving beer with a liquor license inherited from the former Rusty's Pizza. In fall 2002 he started the process of upgrading it to a full service liquor license, as part of his vision for "a nice local place where people can come get a bite to eat and have some drinks." Liquor licenses are always controversial in IV since there are so many alcohol-distributing businesses, and two years later, the Isla Vista Foot Patrol was protesting the license upgrade as part of wanting to reduce alcohol consumption, while the third district supervisor supported it as a reasonable alternative to house parties. The state approved the upgrade in late 2004, with conditions including "no exterior advertisements promoting alcohol, no “happy hour” discounts on hard alcohol, no admission charge and full meal service...“[The conditions] were tough, but I thought they were fair,” Fundament said. “I’m OK with it because those are the same conditions The Study Hall has on their license.”"

In a 2006 article about a nearby restaurant closing, the owner of Dublin's said "it can be especially costly to run a business in I.V. during November and December. He said students are out of town for almost half of the business days during those two months and the sharp decrease in business often makes him question whether he wants to continue running his bar. “You ask yourself, ‘Do I really want to do this all over again?'”"

It may have been sold in the past year or so - there was a listing that said "One of three liquor licenses in Isla Vista and no more likely to be granted! Includes adjacent fully equipped Deli with hood. An institution in Isla Vista for more than 18 years! Type 47 License Included. Square Footage: 1,500, Lease: $4,700/month + NNN".

"Nest building" that may replace this building

In February 2014, the Nexus published an article about an upcoming meeting to "discuss the conceptual review of the mixed use project by The Nest Isla Vista LLC, which would prospectively build 12,513 square feet of commercial space, 8,400 square feet of hotel space and 11,632 square feet of residential space at 910 Embarcadero del Norte", which is the current location of Dublin's and Precious Slut. The article includes student concerns about the development not fitting the character of Isla Vista.

After that meeting in February 2014, The Bottom Line published an article with more student concerns: "Sootar cited a host of potential issues with The Nest—further congestion of the heavily used bike thoroughfare on Pardall, a lack of available parking (23 spaces for 33 total units), and the potentially high rent expense of another luxury apartment complex...the project has prompted opposition from student leaders—many question the need for an IV hotel, the unequal benefits provided for property owners, and even if the design fits the architectural disposition of the community."

That article also has a description of the building plan: "A conceptual handout of The Nest suggests a cross between Dr. Seuss and the French Quarter—stylized swirls and ceramic tile meet the pavement, drawing up to painted walls of coral pink and sunlit yellow. The building—featuring glass archways, a fanciful array of windmills, outcropping canopies, and hanging vines—embodies this whimsical conception. Surrounded by palm trees at the north and west, the concept also incorporates a plan for a deck and glass pavilion on the recessed third floor."

The minutes from a March 2014 Santa Barbara County Board of Architectural Review Committee meeting include "The SBAR recognizes that this is an important and highly visible site in Isla Vista. The project poses an interesting challenge as IV is in transition. So this project needs to fit into and help guide the transition of IV." and "The plan works. Mass, bulk and scale are all appropriate. Like the human scale of the project and believe that the spaces will be wonderful and will become a place that people will enjoy."

According to a Nexus article covering an A.S. Senate meeting in March 2014, Shelton went to the meeting to try to explain the planned building and counter student criticism of the project. He said that it fit with the IV Master Plan goal of denser housing for IV. "Shelton said the Nest will provide affordable single unit housing, rentable hotel space and commercial space in a way that fits with the existing community while also living up to environmentally-friendly ideals...“My goal as an architect is to try to make it work in the community,” Shelton said. “Now, the community is not all built up yet, so you kind of have to look ahead to make it work … I’ve got to keep it livable and interesting for the community at that street.” Senators expressed concern about the way the proposed development would affect property values and local businesses."

An October 2014 article in The Bottom Line said "Additionally, a proposal has been made for the University to occupy the Nest building, which includes the businesses South Coast Deli, Dublin’s, and Precious Slut. The developer of this project has approached UCSB offering to convert the Nest into a student and academic services center, which would possibly include a 24-hour cafe and a health and wellness center, among other resources."

It's not clear what's happening with this Nest project, or how that center would work in the context of the A.S. Pardall Center nearby on Pardall and the Student Resource Building nearby on campus.

It's interesting though that the architect is Jeff Shelton, who has a distinctive artistic/whimsical take on Spanish Colonial Revival style that has been heavily influencing downtown Santa Barbara for several years. It's a very "fancy" style, not typical for IV buildings.

Dublin's is one corner of the intersection at the center of downtown, a very visible business location. It's been a steady presence for 13 years.

Alcohol is an important factor in IV life, and this hard liquor license is controversial. Running a bar and restaurant anywhere is hard, but being in IV puts extra constraints on a business because of officials concerned about IV's alcohol problems - along with the difficulty of the seasonal population.

In the end, Dublin's isn't the most popular place in town, it's probably not a super profitable business, and the building isn't architecturally distinctive. It's a logical site for redevelopment. But students are concerned about the effects of replacing this humble homey Spanish Revival-style building with a large new luxury building like recent developments circling downtown (The LOOP, ICON, Icon Gardens, and Plaza Lofts).

Student residents seem to frequently disagree with architects and the County Board of Architectural Review about what IV's ideal architectural style should be. When new buildings get built, students feel they're too modern-looking and much too large, while the county wants IV to move beyond a slouchy beachy town. It's not clear, but students might not be attending or speaking at the County Board of Architectural Review meetings.