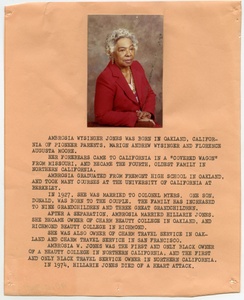 Ambrosia Wysinger Jones (August 30, 1905 – 1999) was a business, travel agency and restaurant owner, and established the Charm Beauty College, in Oakland, the first African American to own and operate a beauty college in Northern California.

Born in Oakland, California, Wysinger Jones was the granddaughter of famed civil rights activist Edmond Wysinger, one of the early advocates for the desegregation of the California public schools in the 1890s. She was a graduate of Fremont High.

She married Hillarie Jones in 1940s and together they owned and operated many businesses, such as a chain of barber shops throughout Oakland. They also owned the Alameda Barbeque Pit and the Union Barbershop in Alameda.

The couple established the Charm Beauty College in Northern California in 1960, the first owned and operated by African Americans, and they owned another beauty college in Richmond, California.

Charm Travel, the first Black travel agency was begun by the Jones, with a focus on vacations for African Americans to destinations in the Caribbean and Africa.