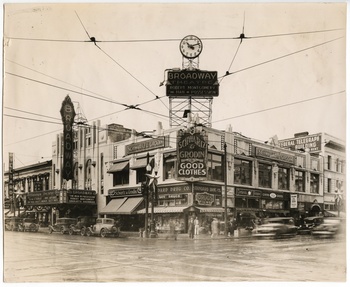 The Broadway Theatre was located at 1121 Broadway.

The Novelty Theatre across the street at 1122 Broadway moved to this location in 1908, then became the Broadway in 1909. 3

When the theater was renovated, it initially was renamed the New Broadway when it reopened on August 9, 1930, but later shortened to the Broadway. 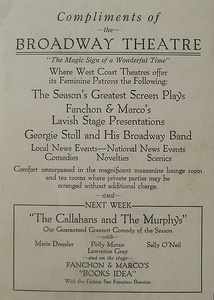 The theater was demolished during the week of November 21, 1972 to make way for Oakland City Center, a $150 million, 15-block City Center downtown regional shopping center, with a skyscraper hotel proposed for the theater’s former site.1 Construction of the City Center project was stalled in the late 1970s and during the 1980s, so it was not until the late 1980s that construction was begun on an office building on the site. Construction was again paused after the 1989 Loma Prieta earthquake, and what is now known as 1111 Broadway opened in 1990 as the headquarters of American President Lines.