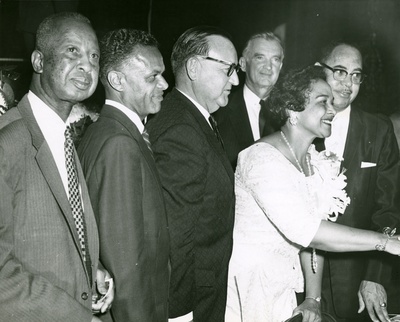 Gibson was born February 14, 1891, in Texas, to ? and Mary Brown. The 1920 census lists him as a railroad porter living in Texas with his wife Christine Griffin (Gibson). Their daughter Christine Maude Gibson (Sims) was born in California in 1924, so they had moved by then. He was listed as a (Pullman) porter in the 1940 census, but had begun his political career years before.

"Born in Calvert, Texas, Gibson graduated from Guadalupe College in Suguin, Texas. During World War I Gibson joined the 92nd Infantry Division of the U.S. Army and fought in France.

After the war, Gibson moved to California in 1920 and settled in the East Bay. At first Gibson worked as a real estate agent, then later he established operated one of the most successful distribution businesses on the West Coast, selling subscriptions for Black newspapers, periodicals and cosmetic supplies.

In the 1920s, Gibson founded the first Black political club in Oakland, the Appomattox Club, and worked with the club's successors, such as the East Bay Democratic Club and the Men of Tomorrow, to establish a political base with the Bay Area's extremely small Black middle class.

Gibson became active in Democratic politics sometime in the early in the 1920s or 1930s. Filling many positions within the party, Gibson served in the Democratic Party in multiple capacities as a club chairman, district coordinator, campaign coordinator, county coordinator, and state representative.

D. G. Gibson was one of a tight knit group of political, union and community 'oldtimers' which consisted of people such as C. L. Dellums, Walter Gordon, Frances Albrier, Tarea Hall Pittman, and William Byron Rumford.