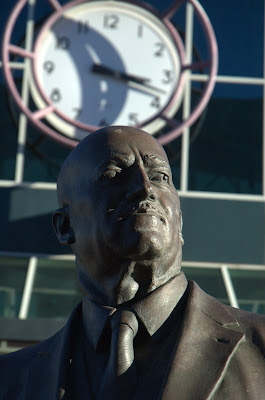 statue of C.L. Dellums
photo from Our OaklandCottrell Laurence "C. L." Dellums (January 3, 1900 – December 6, 1989) was a civil rights activist, a labor leader, one of the organizers and leaders of the Brotherhood of Sleeping Car Porters, and the uncle of U.S. Representative Ron Dellums.

Born in Corsicana, Texas, C.L. Dellums was the son of William H. Dellums and Emma Dellums. In order to escape the racial segregation of the South, Dellums moved to Oakland, California at the age of 23. Although he had dreams of attending the University of California, Berkeley so as to obtain a law degree, the only jobs available for most African Americans at the time were in the service such as laborers, janitors, and waiters. Unable to afford law school, in January 1924 Dellums began work as a Pullman porter.

Dellums rose to the position as the International President of the Brotherhood of Sleeping Car Porters. He was also a member of the Fair Employment Practices Commission.

A building near the African American Museum and Library of Oakland is named for him, and a statue of him stands at the Jack London Square Amtrak station.

The Cottrell Laurence Dellums Papers are now online through Calisphere. Many of them are fair use.