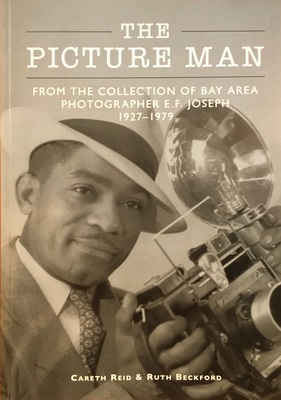 Following his graduation, in 1924 Joseph moved to Oakland, California where he apprenticed at a white owned photography studio.

Joseph was the first professional African American photographer in the San Francisco Bay Area to operate a commercial and studio photography studio. The business was initially conducted from his home at 1303 Adeline Street. Later, Joseph moved the business to 384 - 50th Street in Oakland.

Joseph worked as a photojournalist at the Pittsburg Courier, California Voice, San Francisco Chronicle and Oakland Post-Enquirer. Between 1930-1970 he took pictures of the Richmond shipyards during the war, "African-American Rosie the Riveters" and Lena Horne launching the USS George Washington Carver Liberty ship in 1943. 1

There is a quote from a plaque at the AAMLO with no attribution: "Watching Joseph at work was a treat. He was not a tall man and often carried a small ladder to provide elevation on difficult shots. Alyce, his devoted wife would toss Joseph flashbulbs as fast as he snapped his shutter. When the bulbs were spent, he snapped his fingers and hissed, "Alyce, Alyce," tossing them back to her in an act that never failed to entertain. Tall, thin and graceful, Alyce would glide through her motions never missing a step. Few occasions in the African American community were ever complete without E.F. and Alyce present to record it."

Joseph was married to Alyce Joseph until her death in 1963. In 1968, Joseph married his second wife, Lucy Lartique, to whom he was married until his death in 1979.

After Joseph's death his wife wanted to sell the negatives for $2,000. The first buyer wanted them for the silver. Careth Reid, a retired San Francisco State professor, bought them and donated 10,000 of Joseph's photographs to SF State in 2012. 1 According to Reid, she offered $2,000 for all the negatives. Joseph's widow said OK, but you have to take all the negatives and all his papers, too.

In 2018, Careth Reid and Ruth Beckford released The Picture Man: From the Collection of Bay Area Photographer E. F. Joseph, 1927-1979. It contains numerous photos shot by E. F., and a few showing him working. 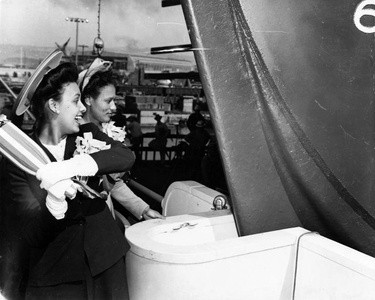 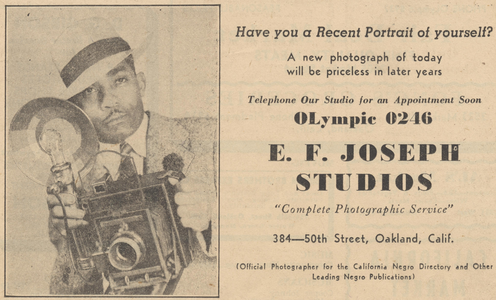 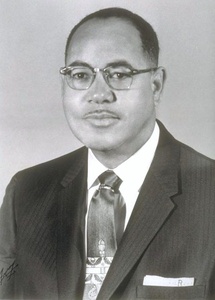 (if someone can determine if these are in public domain, please make into images!)