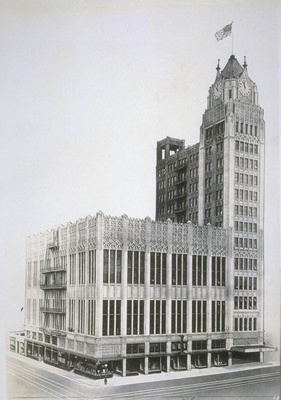 The Elks Club Building was located at 1948 Broadway, between 19th and 20th Streets, Oakland, California. It was later known as the Hotel Carillon. Construction of the "magnificent new home" of the Elks was completed in 1926 at a cost of $1,300,000. The architect was William C. Knowles.

The main part of the building was 8 stories tall, and the tower section was 16 stories tall. There were a set of chimes which played "Auld Lang Syne" daily. Although it was constructed during Prohibition, a barroom was part of the design, in anticipation of the end of Prohibition. The Great Depression began in 1929. In 1934, the Elks rented the upper 7 floors out to become the Hotel Carillon. Unable to pay back taxes, the Elks put it on the auction block, but no one bought it. Later, it was purchased by Jackson Furniture. 2

World War II saw the building used by the the U.S. Army Air Corps for headquarters for various commands. Jackson Furniture found a different location for their headquarters, and sold the building in 1949. The owners leased the building out for use as a hotel, run by Greg Fallas. 2

The building was demolished a scant 40 years after construction, in January, 1966. 2 The Elks Club Building in Sacramento is of a similar scale, though has different architectural elements, and is still standing at 921 - 11th Street between the Amtrak Station and the capitol. The Sacramento building has magnificent (restored) details inside; one imagines that the Oakland building had similar details.