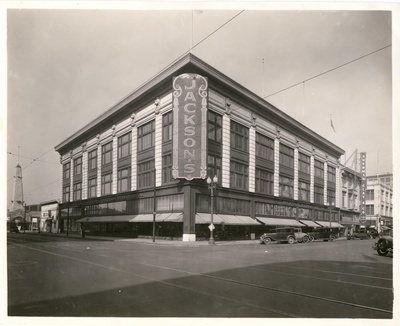 H. K. Jackson started his first business venture in 1889, the Chicago Clock Company, located in Oakland. The store on 7th Street was small, measuring only 25' by 10' in which Jackson sold clocks, rugs and furniture.

Business was good enabling Jackson to move into a larger location 50' by 15' in the Uptown area of Oakland. Eventually, Jackson moved the Jackson Furniture Company once again to the 12th and Clay Streets location.

The grand opening of Jackson Furniture on December 3, 1910 drew crowds of approximately 25,000 people to the new store. Located on the west side of Clay Street, the store stood three stories high and was considered a "veritable mercantile palace." Renowned as one of the largest retail furniture companies in all of Northern California, the new store was the 4th location for Jackson in Oakland.

Furniture was not the sole commodity sold at Jackson Furniture; everything for the home was for sale, from appliances, rugs, drapes, china dinner sets, and any other home furnishing imaginable. Over 2,000 electric light bulbs brightly illuminated the vast displays.

In addition to being an excellent businessman, H. K. Jackson was also a compassionate man. Following the San Francisco Earthquake and Fire of 1906, many merchants raised their prices. Jackson is said to have told L. W. "That's not right. I want to make money ... but not that way. We'll keep our prices just as they were."

After the major fire of September 17, 1923 in which over 640 structures were destroyed in Berkeley, California H. K. Jackson showed his compassion once again when he wiped his account ledgers of all the debts totaling into the the thousands of dollars from those who were effected by the fire. 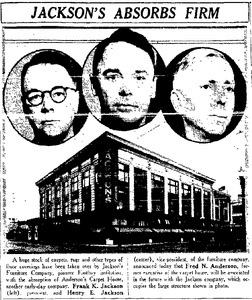 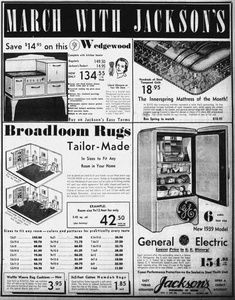 The absorption of Anderson's Carpet House, on March 15, 1934, brought together under one roof Oakland's two oldest home furnishing stores Histories of the firms are almost identical. Accounts and business of Anderson's Carpet House were transferred to the Jackson store when the store was absorbed. An estimated $70,000 worth of rugs, carpets, linoleum, furniture, and lamps were sold by Jackson's for 30% to 50% off during the Anderson purchase sale. Fred N. Anderson became and associate for Jackson's until 1936. Harry S. Anderson retired from active business.

Jackson Furniture was the co-sponsor of the design and construction for the 1952 California Spring Garden Show (sometimes called the Oakland Garden Show.) That year the exhibit was also called the "Pacifica House" and spawned a furniture collection at Jackson's Furniture Co. called "Pacifica." 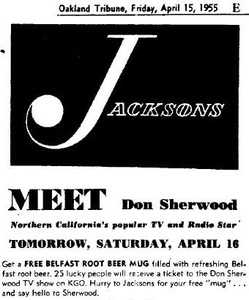 In 1955, Jackson's used local television and radio star, Don Sherwood, to draw people to the store and for the opportunity to see a taping of his live TV show on KGO called, "Pop Club." Pop Club was directed by Willard S. Anderson, son of Harry S. Anderson, head of Anderson's Carpet House (absorbed by Jackson's in 1934).

The Jackson Furniture building was demolished in 1979 to make way for part of the Federal Office building.