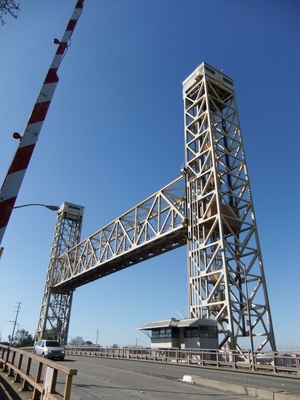 Fruitvale Avenue Railroad Bridge
(Miller-Sweeney Bridge in foreground)
photo from Our OaklandBuilt by the U.S. Army Corps of Engineers in 1951, the Fruitvale Avenue Railroad Bridge spans the Oakland Estuary from Oakland to Alameda.  Although the bridge is still owned by the Corps of Engineers, the Alameda County Public Works Agency maintains the bridge.  Note that the County's website states that the bridge "receives approximately 30 train crossings per month," even though it actually has not been used since 2000, and is no longer connected to any operating train tracks.  The City of Alameda hopes to someday use the bridge for light rail trains connecting Alameda to Oakland.

This bridge is immediately adjacent to the Miller-Sweeney Bridge, which carries Fruitvale Avenue over the Estuary. 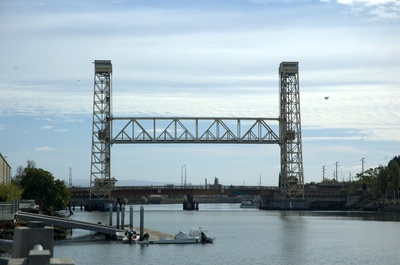