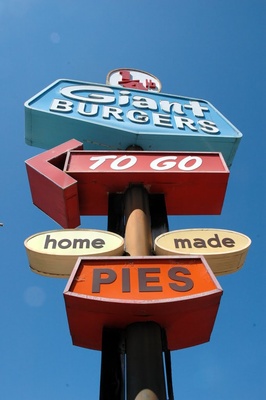 Giant Burger (¼ lb. Giant Burgers) is a chain of burger joints local to the East Bay. They are mostly gone from Oakland today, though a handful survive. However, these days they all seem more like independently-run franchises bearing little resemblance to each other.

If you come across a place that looks like it might once have been part of this chain, certain continuity cues on the menus betray their shared ancestry. Any mention of pies or “snails” is a sign—a holdover from olden days, as few burger joints nowadays bother with pies, and even fewer carry (pastry) snails any more.

Back in 1954 when the Oakland Oaks were still playing, former Oaks outfielder Brooks Holder (with Oaks 1946–1948) and Jack Hambrick opened Hambrick's Drive-In at San Pablo Avenue and 24th Street. The owners of Doggie Diner filed an injunction saying Holder and Hambrick were copying them, so Judge Richard H. Chamberlain went and personally investigated. While he noted similarities, there were also significant differences. He denied the injunction, saying the stands were distinguishable "by an ordinarily observant purchaser." 2

¼ lb. Giant Burgers shouldn't be confused with Nation's Giant Burgers, which has its own 'giant' lineage, and is also big on pies. 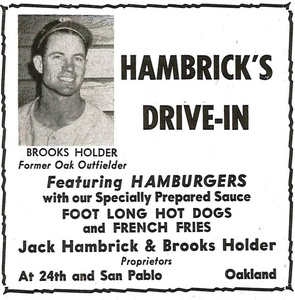 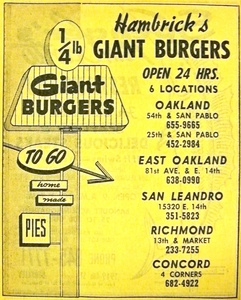 You might well ask why anyone would waste time tracking what became of a non-famous, seemingly moribund semi-chain of burger joints; however, an argument could be made that it matters as an economic indicator precisely because burgers are a democratic unit of food that’s within reach of nearly everyone. The Economist famously uses the McDonald’s Big Mac as a unit to discuss economies of far-flung nations whose currencies might not relate to ours very well, mainly because everyone, everywhere, understands what a Big Mac is. Similarly, the fact that today one can still find many thriving examples of the locally-owned Nations/Hambricks style, old-school 24-hour burger joint in neighboring cities, but less so in Oakland, holds all sorts of interesting implications as to the shifting dynamics of money and power around these here parts over time. This sort of deeper analysis of “Giant Burger in the larger scheme of things” probably ultimately belongs somewhere else other than in the Giant Burger entry itself, but for now, is offered here for your comments! In any case, it’s something to ponder next time you’re waiting outside the window for them to call your number… 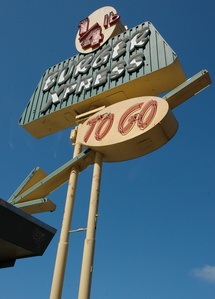 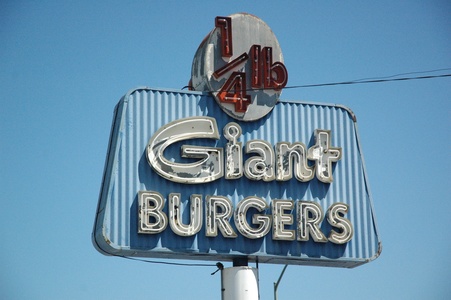 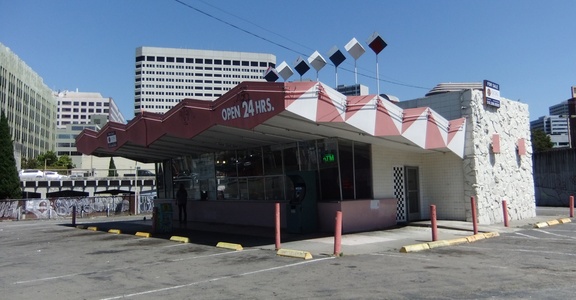 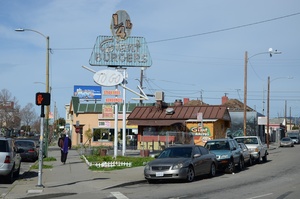