The majority of the freeway was completed in 1969 and 1970. For many years, however, construction of the section of the freeway between I-580 and I-880 was held up by a lawsuit, and the final connection to the Nimitz Freeway did not open until March 6, 1985.

Construction of the Grove Shafter Freeway required the demolition of numerous established residential and commercial blocks. The excellent book Temescal Legacies by Jeff Norman has a lot of interesting history about the construction of the freeway and residents' political efforts in response to its planned construction. 1968 view of Grove-Shafter freeway between 52nd Street and I-580, courtesy Oakland Museum of California

1969 view of Grove-Shafter freeway between Telegraph Avenue and I-580, courtesy Oakland Museum of California 1970 view of Grove-Shafter freeway and BART between I-580 and southern end, courtesy Oakland Museum of California 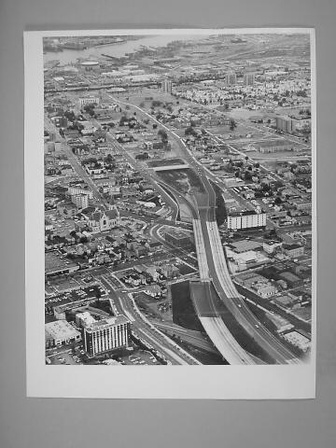 Traffic on the Grove Shafter Freeway!

Residents Say I-980 Should Be Removed

In 2013, a group of residents suggested that I-980, which is the portion of the Grove Shafter freeway between the I-580 and I-880, should be removed. This appears to be a small group of (right-on) planning gurus, with a very small chance of succeeding.