In April of  1932, Hagstrom's Food Stores was formed by Emil A Hagstrom, who just 5 years earlier sold of his chain of 300 plus Mutual Stores to MacMarr Stores.    The first ten stores were opened in June of that same year.

The firm's headquarters were opened in the old Stars Motor Plant at 107th and E.14th Street. There was a small office building in the front of a large building divided into three wings. The central section was used for the grocery and produce warehouse for the stores, while the other was used for the creamery and bakery. The space between was for loading platforms and maintenance for the delivery trucks.  The grounds surrounding the plant were landscaped and kept up as a beautiful park.1

A fleet of trucks and drivers delivered these goods to the stores several times a day, to ensure freshness and quality. 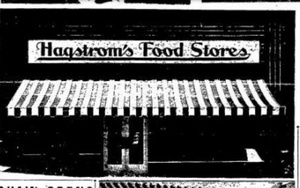 In June of 1932, the first ten stores opened   "Each Store will be a Complete Market" with "Choice Fresh Meats and Vegetables".    After that it was to be followed by an additional store each week. 2 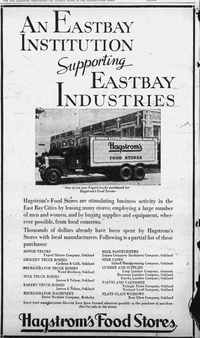