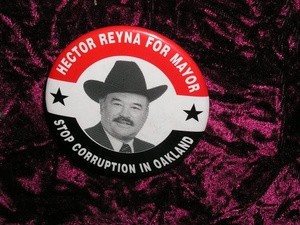 Born on March 4, 1935 in Texas, Reyna served in the Air Force during the Korean War. He moved to Oakland in 1955-1957 from Corpus Christi, Texas. He owned several businesses in Oakland over the years, including a recycling business ("Mr. Recycle") and a limousine company ("Millionaire Limousine") run by his daughter. After a disagreement with the City Council over an ordinance that affected one of his properties, he ran for Council in the mid-1960s and lost. A 1965 article about running for mayor lists Reyna as a "teamster and warehouseman, machinist, Democratic political organizer." 5

Over the years Mr. Reyna became a gadfly in the City Council, "to raise hell with those people." 1 He also ran for office numerous other times over the years, including for city council; the BART board; the AC Transit board; the East Bay Regional Parks board; the California Senate; U.S. Congress, and against every mayor of Oakland for 25 years, from Lionel Wilson to Ron Dellums.

Hector Reyna passed away on October 23, 2008, never having won a single race for office.