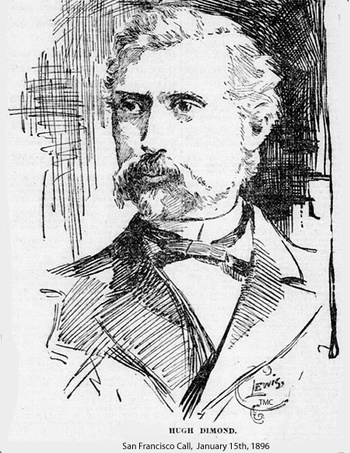 Hugh Dimond (March 27, 1830 – January 14, 1896) came to California for the Gold Rush and purchased the land that became the Dimond District district in 1867. Originally the Peraltas owned the land, who passed the land via some investors to Henderson Luelling, who planted numerous fruit trees and named the plot Fruit Vale.

Dimond was born in County Kerry, Ireland in 1830. At age 14, he and his younger brother Neil made their way to New York in 1844. Lured to California by the Gold Rush, Hugh came via Panama, sailing through the Golden Gate on June 22, 1850. He headed straight to gold country in Mariposa County and got to work. Having made some money mining, he then entered into a partnership with C. D. O'Sullivan and W. F. Cashman and opened a general store. The firm "made money at a lively rate". In 1862, they moved to San Francisco, opening O'Sullivan, Cashman & Co., a wholesale liquor business. 2

He invested some of his profits in real estate, purchasing 267 acres in 1867 in the Oakland foothills along Sausal Creek, an area including the Luelling spread near the cherry orchards and the hay farms. He settled there immediately.

[ In 1876 Hugh Dimond's occupation was listed as 'farmer' and his address was 967 Jackson Street. Was this before he moved to the Fruitvale area? Or was there a Jackson Street in what is now the Dimond? The latter would fit better with the dates above. ]

Nellie never married, but lived with her brothers and their families. Hugh attended St. Mary's College (class of 1894) in Oakland, and was active in athletics there; he married Ellen T. Boland (Dimond) in 1899. Denis married Madeline "Mandy" Stirling (Dimond), who was the niece of Frank C. Havens. Although Denis was active at St. Anthony's, they were married at Sacred Heart Church c. January, 1906.

Eyewitness accounts say the home was an imposing two-story white wooden structure surrounded by a spacious one-story veranda. Dimond Avenue began as the carriage entrance to the Dimond place, which was situated just beyond the grove of redwood trees in today's Dimond Park. In 1896, the year of Hugh Dimond's death, his son Denis moved some of the adobe bricks from the original Peralta adobe to the area of Dimond Park, and built a studio cottage.

About 223 acres of the land was sold to the Pacific Mutual Life Insurance Company in 1905; more was sold to Borax Smith in 1907. By 1910 the last of Hugh and Ellen's children had moved out of Oakland. The main Dimond house was badly damaged in a fire in 1913 1, leaving the adobe cottage. Four years later in 1917, the Dimond family sold the last 12 acres of the property to the city. The cottage was used by the Boy Scouts from 1919 until a fire in 1954.

Hugh suffered a heart attack during a meeting of the Hibernia Savings and Loan Society. He returned home, then died January 14, 1896 after another heart attack. 2 The funeral was held at St. Anthony's Church in Oakland. Hugh Dimond was buried in Laurel Hill Cemetery in San Francisco (which was eventually moved to Colma along with San Francisco's other cemeteries.) In his will, he left $2,000 in gold coin to his brother Neil (who lived in Wisconsin) and $2,000 to his friend (and surviving executor of the will) Lawrence Cunningham. The rest was divided between his children. His will also specified that he was "opposed to any ostentation at funerals" and gave specific instructions. 4 His estate was estimated to be $324,231.17 plus $18,847.12 cash, and including the Dimond property, as well as property in Alameda, San Francisco, Glenn County, and San Mateo County. 5