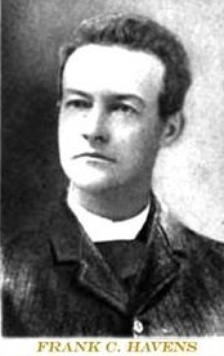 Frank Colton Havens (November 21, 1848 – February 9, 1918) was an attorney and major real estate developer in Berkeley, Piedmont and Oakland. Havens was a business partner of F. M. Smith and together, they created the Realty Syndicate which built a number of Oakland projects. The two were deeply influential in the transformation of the East Bay, developing over 13,000 acres of real estate, including the Key System, Idora Park, Lakeshore Highlands, Crocker Highlands, and the Claremont Hotel.

One of Havens’ real estate developments was Havenscourt.

One of his goals was to own every piece of undeveloped land between northern Alameda County and Gilroy. 2

One reason the East Bay and Oakland Hills (which were mostly bare during Havens’ lifetime) are covered with Eucalyptus trees is largely due to Havens’ importing millions of eucalyptus seedlings from Australia. His plan was to plant a rapidly growing hardwood forest, unaware the trees were unsuitable for construction. Under his direction, the Mahogany Eucalyptus and Land Company planted somewhere between one and three million eucalyptus seedlings in the East Bay Hills. 2

George Sterling, the poet, was Frank C. Havens’ nephew; his wife Carrie was the sister of Frank Havens’ wife Lila. Both women were the first lady secretaries in Oakland, and were secretaries to the two men they eventually married. 3

Two of Frank Havens’ sons, Paul and Seyd, were twins, and their wives Rosalind Fairweather Havens (Paul’s wife) and Grace Little Havens (Seyd’s wife) died within 12 hours of each other on October 24, 1918, from the 1918 Flu Pandemic. 5

On a side note, Havens’ Bernard Maybeck home in Piedmont had its own private meditation chamber, with opium smoking bed, complete with an Eastern philosophical inscription regarding opium and meditation. His mansion also had a “unfinished and unused tomb room.” 1, 2 It appears the tomb room may have been intended for the burial of Frank C. Havens following his death, but was never used for that purpose.

While few people say anything bad about “Borax” Smith, even fewer seem to have good things to say about Havens. “Borax” Smith’s first wife Mary R. Smith reportedly did not like him in the least. Wonder if that had anything to do with Havens’ unusual beliefs (for the time) in Eastern philosophy?? Not everyone disliked him, though. According to Mrs. Elsie Whitaker Martinez (wife of California artist Xavier Timoteo Martinez), Havens “had the cool assurance of a financial genius, an arrogant, but pleasant, easy manner with friends,” “a very interesting personality” and “was one of those personalities that are outside of class.” Also, Mrs. Whitaker Martinez stated “Havens was too imaginative and too reckless to suit Smith, so they parted company.” 3

Frank C. Havens died in his Piedmont home and his ashes are interred at the Chapel of the Chimes in Oakland.