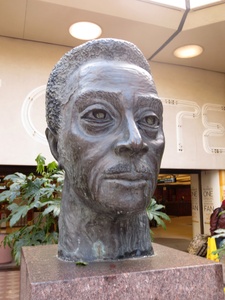 bust of John B. Williams in namesake plaza photo CC SA-BY Our OaklandJohn B. Williams (1917 – October 13, 1976) was a city planner for Oakland in the 1960s and 1970s. He was head of the Oakland Redevelopment Agency and Oakland's Office of Community Development from 1964 to 1976. Mr. Williams was responsible for the redevelopment of Oakland's downtown business district, including the creation of the City Center project. The plaza connecting City Center with the 12th Street BART station is named for him, as is the I-980 Freeway.

Mr. Williams died of cancer on October 13, 1976, at the age of 59. 1 At his funeral on October 19, 1976, then-Mayor John Reading stated that Mr. Williams was one of the most outstanding men he had seen in his decade as mayor. "And I believe it is both prophetic and tremendously significant that they were both black," stated Mayor Reading. 2 (The other man he was referencing was former OUSD superintendent Marcus Foster who had been assassinated a few years earlier.) Hundreds of people came to Williams' funeral at Taylor Memorial United Methodist Church.

A brief video about John B. Williams by Annalee Allen: 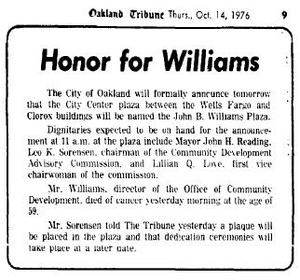