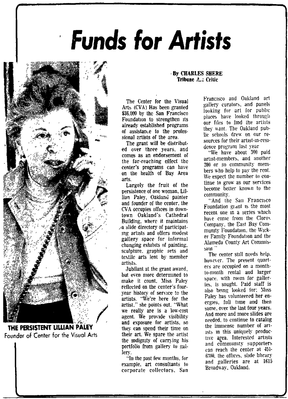 According to the Oakland History Room, Paley was born in New York and educated at NYU and Hunter College. She began her career as an artist in Greenwich Village in the 1930s.

Paley moved to Los Angeles in 1963 after her husband's death, and moved to Oakland in 1967. Paley came up with the idea for the CVA in early 197

In 1975, Paley was appointed to the Citizens' Art Council, along with Ruth Beckford and other citizens. 2

"The Lillian Paley Center for the Visual Arts is a one stop location for artists, gallery operators, consultants, scholars, collectors, and all those interested in the contemporary visual arts. CVA's collection of slides and records help to expand the awareness and appreciation of the arts. Its registry not only documents the accomplishments of American artists but also encourages greater exposure for their work and greater appreciation for art in society. " - undated brochure for CVA

Librarian Kathleen DiGiovanni notes, "As a fascinating example of the speed of change, all these functions are today available on the internet." But at the time it was a remarkable resource for artists and those interested in art.

Senator Nick Petris was chairman of the advisory board for the CVA in 1974. 1

By 1977 the center had moved to John B. Williams Plaza in City Center near 12th Street BART where it also had an exhibit space.