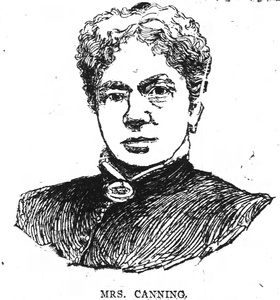 Mary Jane Canning (nee McCann) (1830 – January 25, 1904) was an Irish immigrant who moved to Oakland in 1858. She obtained employment as cook for Horace Carpentier, and “under his guidance the future benefactress amassed a fortune from investments in Oakland property.” She also worked for F. K. Shattuck.

An extremely generous supporter of the Oakland community, Mary Canning was St. Francis de Sales Church’s largest single donor, having given $142,000 (about $3.7M in 2012 dollars) by the time of her death. She also made large contributions for the establishment of Providence Hospital in Oakland.

Mary was married to James Canning (1810–March 20, 1892), an Irish immigrant who made his wealth by investing in Oakland and San Francisco real estate, and who left an estate valued at $500,000.

The couple lived in their Italianate style home at 954 - 16th Street, the Holland-Canning House, which has been designated Oakland Landmark #71, under Zoning Case #LM 83-95.

Both Mary and James Canning are buried in Saint Mary’s Cemetery in Oakland. She commissioned Charles J. I. Devlin to design their vault following James’ death in 1892. 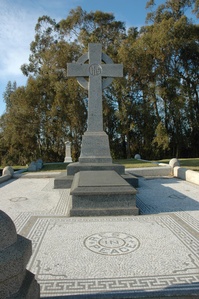