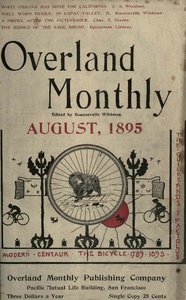 The Overland Monthly was the magazine for poets and writers to appear in on the west coast in the late 1800s and early 1900s. The list includes Jack London, Ina Coolbrith, Joaquin Miller, and more.

Bret Harte was the first editor of the magazine beginning in 1868.

The editor of the Overland Monthly for a time was Charles S. Greene; in 1899 he became Oakland's 3rd librarian (Ina Coolbrith was the 1st). The library that is now AAMLO (African American Museum and Library of Oakland) was named the Charles S. Greene Library in 1951.