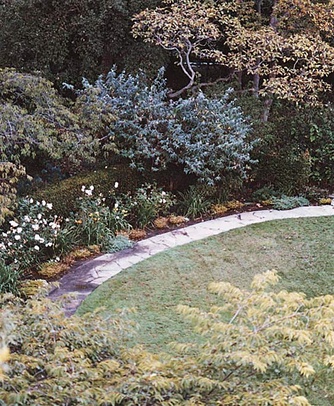 Schilling Gardens were the grounds surrounding the country estate (not main home) of August Schilling, founder of the A. Schilling spice company. Located on the west (Gold Coast?) side of Lake Merritt, roughly bounded by today’s Snow Park, 19th Street, Jackson Streets, and the Lake Merritt shoreline, these gardens were laid out c. 1890-1900 (the gardens are not shown on the 1889 Sanborn map), and reportedly opened to the public fairly regularly until 1911-2. The 1902-1903 Sanborn map (sheet 149) shows that the Schilling home and a separate servants' building were approximately located where the Regillus building is now situated. The Sanborn map indicates that "ornamental grounds" were in at the edge of the property adjacent to where Lakeside Drive was later constructed, an arbor ran from a point opposite the end of Alice Street to within a few feet of the main house and then turned 90 degrees and ran 100+ feet to the middle of the lot, and a "garden" was installed on the remainder of the property adjacent to today's Snow Park. 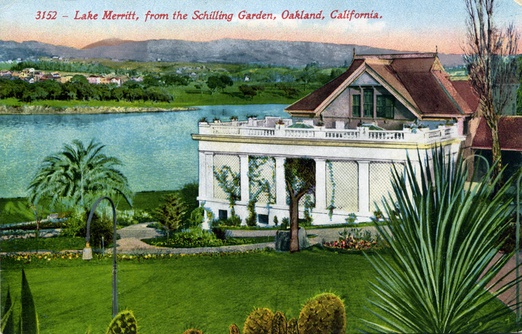 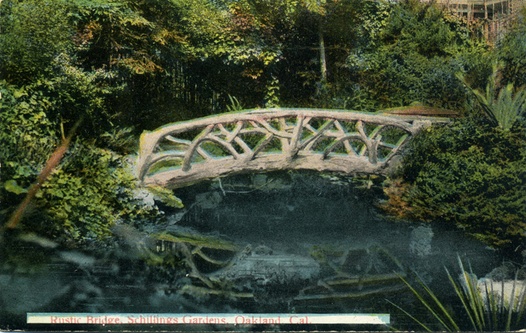 The fantastic, grotto-like gardens rambled all the way to the lake shore (the grassy promontory opposite today’s Bandstand Cove is recognizable in old postcards), ending in private docks, as did many estates prior to Lakeside Drive. An 1898 newspaper article says that A. Schilling “…installed an electric light plant permitting of various colored effects along the edge of the water washing his estate and also around his grounds. This was followed by the erection of a powerful searchlight, which on frequent occasions has amused hundreds who live in the vicinity of the water park …” [i.e. Lake Merritt]. 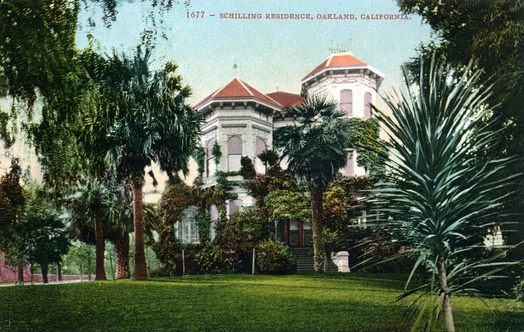 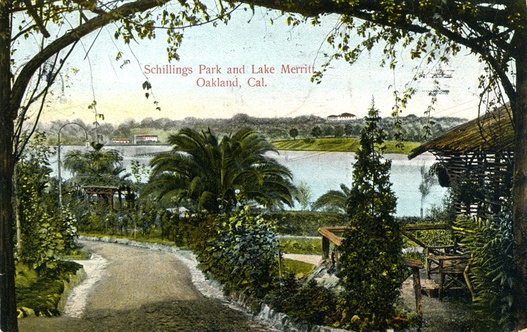 A small, very toned-down remnant of the gardens survives (albeit in a state of arrested decay) next to Snow Park. But since it is well-hidden, securely fenced, and above all, private (it still is occasionally used for various 1% functions) — many Oaklanders don’t realize a bit of Old Oakland anachronistically hangs on right under their noses. This is too bad, not only for their sakes, but because in 2005 the City of Oakland was quietly offered the property, but absent any public awareness (much less input), they hesitated … and meanwhile, a developer swooped in. A plan to build a huge high-rise on the spot was thwarted a few years later, but that doesn’t mean developers (who don’t live here anyway) won’t keep trying.

Everyone today claims to want to preserve our heritage. But we must be mindful that our good intentions aren’t turned against us. Further research indicated that the City of Oakland may have had good reason to decline the 2005 donation (even if they mishandled the offer: sources all agree on this). The garden donation would have come with strings attached; mainly that the city, while assuming estimated $200K yearly maintenance costs, would have been required to keep the garden mostly off-limits to the public. Some[who? – does it matter? No!] have speculated that the slacking of maintenance was deliberate, part of an attempt to make the gardens look hopeless enough that a high-rise would seem an attractive alternative. There is much more to this topic, but it’s less important to detail every theory as it is to advise oaklandwiki readers that this is a “hot button” subject that we all should keep an eye on, lest one day Lake Merritt vanish (being hemmed in by highrises) from the visual landscape. 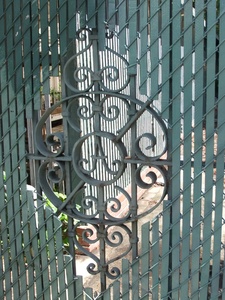 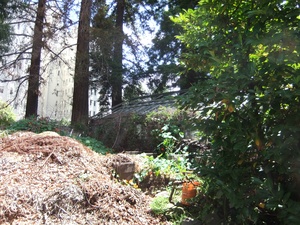 there’s a greenhouse in there 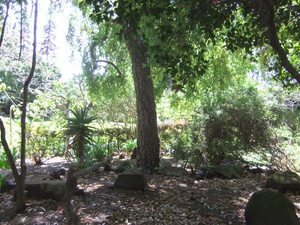