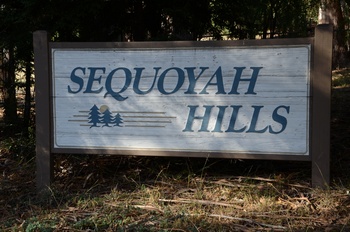 Sequoyah is a neighborhood of Oakland also known as Sequoyah Heights or Sequoyah Hills. The area is above 580 between Skyline Blvd. and Golf Links Road.

The area was developed around and named for the Oak Knoll Country Club and the Sequoyah Country Club. The target buyers were wealthier—they wanted to live close to country clubs—and they generally need access to cars to get to the hilly homes. The neighborhood was called the "Piedmont of East Oakland" 4. The lots in the area were large. Although the tract was designed before WWI, the homes resumed sale in 1923 and people who bought the houses were often spending money earned during wartime. Advertisements boasted about the lack of apartments in the area. 1

There was a grass fire in 1929 a few years after the first homes in Seqouyah were built, Lack of water became an issue for the firefighter so water from the country club had to be used. Despite the fires ferocity, most of the homes were unharmed. 7

The neighborhood is noted for having 54 Eichler homes. 2

There are two distinct parts of Sequoyah the areas above and around the country club and the area between the country club, naval hospital and 580. The area above and around the golf course is newer and contains many Eichler and ranch style homes from the 1960s. The area below the country club is older, boasting Spanish Revival, Tudor, and even Colonial homes. The older tract known as "Fairway Estates" was built in the 1920s and 1930s around the two country clubs in the area, 3Oak Knoll Country Club and the Sequoyah Country Club. The newer tract is more modest and higher up in the hills likely built to accommodate the nurses and doctors that worked at the Naval hospital built in the 1960s on the site of the 2Oak Knoll Country Club

Sequoyah is home to the Oak Knoll Naval hospital. The hospital has been closed since 1996, and the main building demolished in 2011. The area is huge and has been a discussion of development.