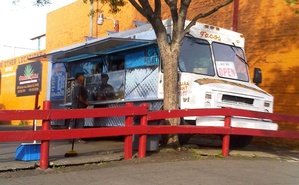 A taco truck in East Oakland. Specifically, Tacos Guadalajara.Taco trucks are mobile food vending vehicles that serve tacos and other taqueria-style fare from various parking lots and street corners in Oakland. The highest density of taco trucks is in the Fruitvale district.

Taco trucks are street legal vehicles capable of moving for catering or other events but tend to hold regular a regular schedule and location. This is in comparison to food carts which are completely stationary and not as common in Oakland. Many taco trucks are satellite taco vendors owned by a brick and mortar taqueria.

While other types of food trucks come out of the woodwork for special events, taco trucks are the mainstay for Oakland when it comes to street food served from trucks that hold regular hours of operation.

History of Taco Trucks in Oakland

Taco trucks have been in Oakland since the early 1980's. The first taco trucks started in the Fruitvale district. In 1982, Primitivo Guzman parked Oakland's first taco truck, Taco El Zamorano, in the parking lot for Los Mexicanos Market on High Street and E14th st (International blvd).1  Later, in 1983, a truck started service in the Walgreens parking lot on the corner of Fruitvale Ave and Foothill Blvd. In 1985, Mi Grullense started its taco truck on E14th st (International blvd) and 29th Ave in the Montgomery Wards auto shop parking lot (now a Goodwill store).

Taco trucks started in the Fruitvale district with these three taco trucks and have since grown in numbers. Now you can find taco trucks in many districts of East Oakland like San Antonio, Melrose, and Elmhurst, as well as in West Oakland and downtown Oakland. There's usually one in Old Oakland at night for the club crowds. Taco trucks have become part of Oakland's unique local culture.