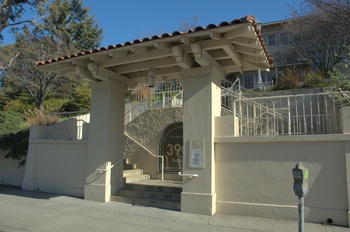 entrance at 3900 Broadway
photo CC SA-BY from Our Oakland

The King’s Daughters Home was a hospital for “incurables” (those that medical science of the day had no way to treat: stroke victims; the aged and infirm; or people with tuberculosis) at 3900 Broadway. The Julia Morgan-designed building, dedicated in 1912, is now used by Kaiser Permanente.

The King’s Daughters (later The International Order of the King’s Daughters and Sons) is “an interdenominational Christian service organization” founded in 1886. The order’s symbol is a Maltese cross, and its name refers to God. Many local chapters built such homes, some of which are still in use today as hospitals. Julia Morgan used the Maltese cross logo in multiple places on the building, including on the entry gate and the details on the lanterns near the entryways. The building was described at the time as "a massive three-story structure of brick, concrete and slate, absolutely fireproof and easily able to accommodate 100 patients."

The Broadway home was not Oakland’s first. The first had been near 11th and Oak Streets, on land donated by Carrie Judd Montgomery. That one had burned in April 1902, when an elderly resident, William Bray, knocked over a heating lamp during an epileptic fit. The resulting “awful fire” likely killed several residents.

The new building was constructed after considerable fundraising efforts by the local King’s Daughters. They raised $100,000 for the construction and outfitting of the home. During one campaign they asked every home in Oakland, Berkeley and Alameda to contribute at least $1, and coin envelopes were delivered and collected door to door. They also hosted a reception on Easter in 1906.

Eliza Morgan (Julia Morgan’s mother) donated for the front gate (which Julia also designed) in memory of Julia’s younger brother Gardner Bulkey “Sam” Morgan who died in 1913 at age 33. According to local historian Betty Marvin (who does a great re-enactment of Julia Morgan), Sam was a battalion chief with the Oakland Fire Department.

Jack London’s first wife Bessie Maddern London was a resident there, after suffering a debilitating stroke. She lived there for at least 10 years.

Some former residents are buried in a plot in one of the unendowed sections of Mountain View Cemetery. 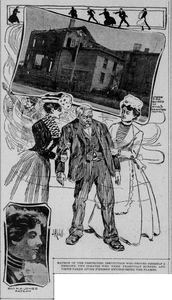 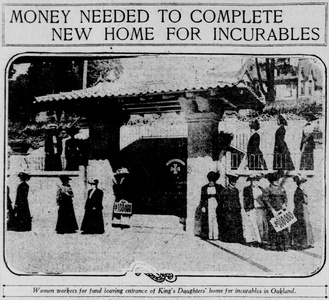 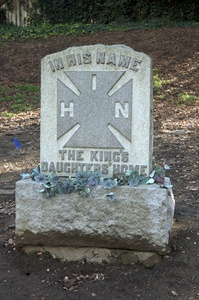 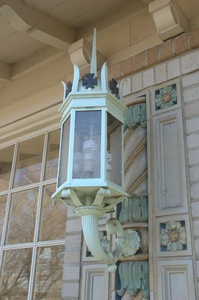 lamp on home
photo CC SA-BY from Our Oakland 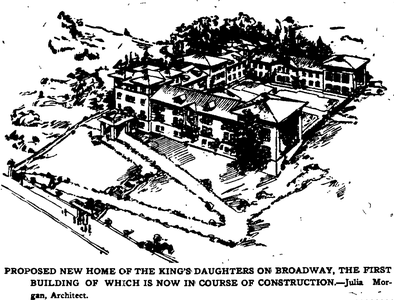 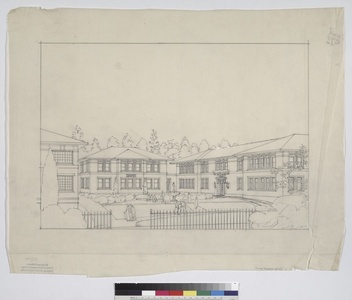 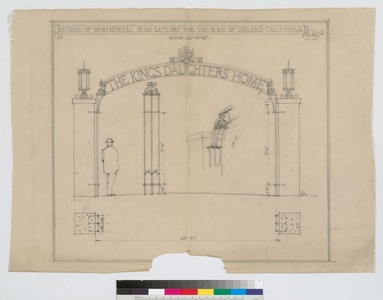