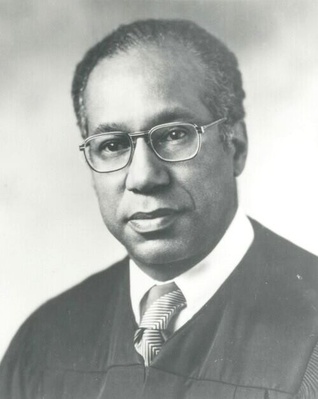 Manuel was born in Oakland and grew up in south Berkeley. His father was a dining car waiter for the Southern Pacific Railroad, and his mother worked as a servant. 4 He attended Berkeley High School (1945), where he was the backup 2nd baseman behind Billy Martin. 5

In 1948, he married Eleanor Manuel, 3 and they had two children, Yvonne Manuel and Gary Manuel. .

Manuel served a year in the US Army, then graduated from UC Berkeley and from Hastings Law School (1953) where he was top of the class for 2 of the 3 years.

He was a founding member of the Charles Houston Law Club, and served as president in 1963. 7 In 1964, he was considered (along with Allen Broussard and Henry Rodriguez) to replace Lionel Wilson, who had moved from the municipal court to the superior court.

In 1976, then governor Jerry Brown appointed him to the Alameda County Superior Court. In 1977, Brown elevated him to the California Supreme Court. 1,10

Through his career, he was particularly passionate about pro bono work. He was a moderate on the Supreme Court; he and Justice Stanley W. Mosk frequently cast the deciding votes in splits between the liberal and conservative blocs. He was one of 4 of the 7 justices who voted to uphold the constitutionality of California's death penalty law. 4

Manuel served until his death a few years later in 1981 from stomach cancer at Providence Hospital. Services were held at St. Francis de Sales Cathedral, and Manuel was buried at St. Mary's Cemetery. 9

Following his death, various things were named for Manuel or started in his memory: 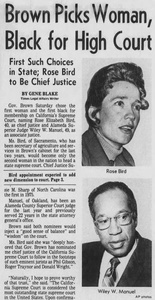