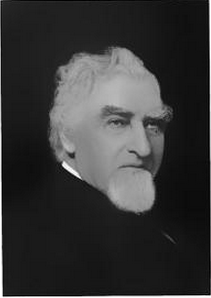 Peter ThomsonPeter Thomson (November 25, 1824 - August 9, 1901) was a successful businessman that also served on the Oakland City Council in 1881 and 1882. He ran unsuccessfully for the position of City Marshal in 1886, and was the City Treasurer in 1891. Although a staunch Republican, Thomson was nominated and elected by both Republican and Democratic parties. 4

Born in Scotland, Thomson came to New York in 1845. Prior to moving west, he worked in the drapery business and the dry-goods business. Thomson lived in Detroit and returned to Scotland before finally moving to San Francisco in 1852.

On August 28, 1852, Thomson married Sarah Maria Fay (December 26, 1827 - May 5, 1904) in New York City and in October they proceeded together to California, via Panama. Together they had at least four children; Lucy Fay Thomson, Catherine "Kittie" Bathrust Thomson (August 10, 1861 - May 15, 1864, who died from diphtheria before reaching the age of three), William Edward Thomson, and David Peter Thomson.

He started working at a dry-goods store which he then converted into a men's shop, to great financial success. He was co-founder of the California Hosiery Company of Oakland, serving for many years at the President and Director.

Throughout his career Thomson made investments in both San Francisco and Oakland real estate, as well as mines located in California, Mexico and Nevada.

In 1863, Thomson relocated across the Bay to Oakland where he owned a seven acre tract at Telegraph Avenue bordered by 36th Street and 37th Street, on which he built a beautiful home complete with ornamental trees, extensive lawns and flowers, driveways and walks. The eastern half of his former estate later became the Industrial Home for the Adult Blind, later known as the Orientation Center for the Blind. In 1964, in part due to the need to acquire a portion of the property to allow the construction of the interchange between the Grove Shafter Freeway and the MacArthur Freeway, the OCB moved to its current location in Albany. Sometime thereafter, the remaining portion of Thomson's old estate became the Oakland office for the California Highway Patrol.

His love of music lead to the promotion of community interest in music, and he enjoyed playing the flute, though only at home for family and friends.

After retiring in 1867 because of asthma, Thomson did what most Oakland pioneers did: concentrated on his real estate holdings with extensive investments in Oakland real estate.

Thomson owned some of the land near the former Webster Street Cemetery, and was able to provide a tracing of a cemetery map, the original having been submitted to the court for the settlement of the Tompkins estate and subsequently lost. This proved useful when development uncovered bodies that hadn't been moved to other cemeteries.

He was a member of the First Presbyterian Church of Oakland. Unlike many early Oaklanders, he was never a member of any fraternal organizations. 4

Thomson was an active member of the board of directors at Mountain View Cemetery for 13 years.3 He helped organize both the Oakland and San Francisco Saint Andrew's Benevolent Societies and for a time, was President of the Oakland organization. 4 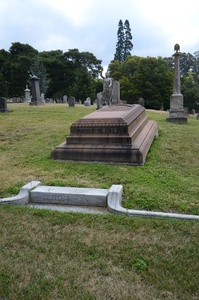 CC SA-BY Our OaklandBefore death, Thomson gave away his considerable wealth of approximately $300,000 to his family so that at the time of his death his estate was estimated to be only $500.2

Peter Thomson died at the age of 76, and Rev. J. S. Macdonald of the First Presbyterian Church presided at his funeral. He is buried in Mountain View Cemetery in plot 4, along with his wife Sarah and their daughter Catherine. An angel statue was placed for Catherine, but some of the features have broken off over the years. 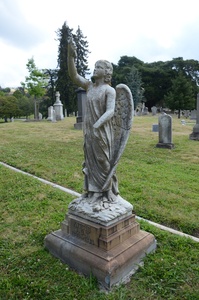