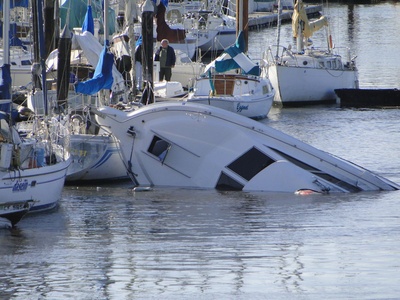 Following a massive 8.9 magnitude earthquake that occured off of the east coast of Japan, a tsunami hit the coast of California on March 11, 2011. The tsunami, which arrived as a 3-foot rise in the water, sank 14 boats, damaged up to 50 others, and caused an estimated $26 million in damage to the Santa Cruz Harbor. At least one surfer had to be rescued from the difficult tide, but no injuries from the event were reported in the county. At 6:40 am the morning of March 11, a pre-recorded reverse 911 call was sent out to 6,620 local residents calling for a voluntary evacuation to higher ground. Officials closed county beaches, which were re-opened by 5pm that day. The first surge arrived at 7:45 am. The damage caused by the tsunami closed the harbor for repairs until March 22.

The destruction by a tsunami depends on the direction and the force of the wave. (The more force, the larger the wave.) To estimate the damage in the county by waves of different direction and force, there is a simulator on the internet at: :http://tsunami-maps.com

The Tsunami of September 15,  2015 from South America was so small in force that it wasn't noticed when it arrived in the Monterey Bay coast at 9:17 AM. 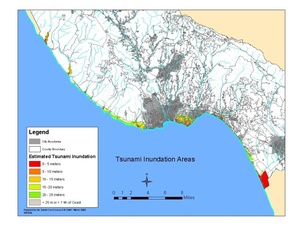 The county has surveyed danger areas in the event of a tsunami. click on the image to enlarge. 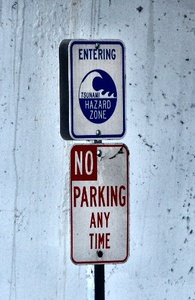 By the end of 2011 several areas now have posted signs warning of potential tsunami hazard zones.