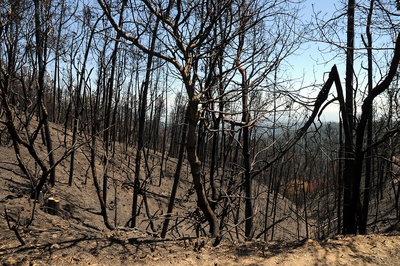 Some of the area burned during the Summit Fire in 2008.

Here are some of the major natural disasters that occurred in Santa Cruz County.

The damage from the Loma Prieta Earthquake in 1989 changed Santa Cruz forever.

The 2020 Forest Fire  was the largest fire in the county. It consumed over 89,000 acres in Santa Cruz County plus San Mateo County. Previously, the  Lockheed Fire was the largest wildfire in recent history, burning 7,817 acres in between Swanton and Bonny Doon.

Several diseases have become unrestrained and infected Santa Cruz County. The usual STDs being the most consistent. During the Spanish Flu of 1918-1919 Monterey County closed the bridge between Pajaro and Watsonville. Sandbags were stacked and a guard posted to prevent people traveling into Monterey from Santa Cruz County.