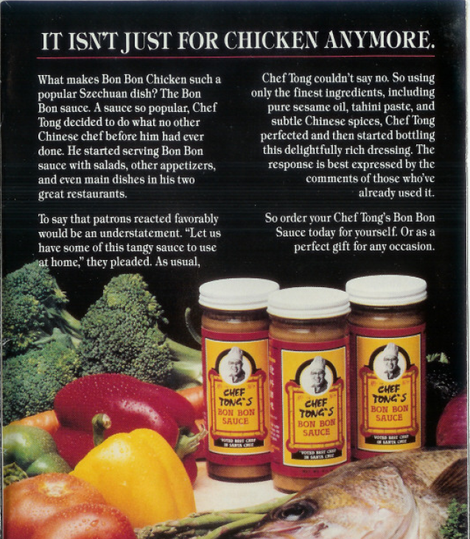 OK, here are some more details...

Chef Tong was quite a character and had seemingly boundless energy prior to his untimely death in 1984.

In addition to his restaurants (prior to that, he also managed The New Riverside), he also published a small cookbook, had a brief run of a TV show (called Cook Along with Chef Tong), and sold Bon Bon sauce bottled under his name.  Just before his passing, the Bon Bon sauce was about to become an item in the Safeway chain, but alas, that didn't happen after he left.  Check it out... :-)

The TV show, "Cook Along with Chef Tong" aired on Ch. 20 in the Bay Area.  It predated the "Yan Can Cook" era.  This persona was quite friendly and the production very simple.  Kind of like if you compare the original Star Trek to any modern day Sci-Fi movie production.  But he still put on a good show.

He loved people, and one of his great talent was to be able to remember people's names with just a single introduction.  Weeks and months later, he will be able to greet that person with a friendly "Hello Mr. James, nice to see you again!".  He also was fluent in seven languages, including English, Japanese, Mandarin, Cantonese, and other Chinese dialects.  In his earlier days, he was a manager of Civil Air Transport at the Japan's Haneda Airport.

He is survived by three sons and a daughter, all still living in California.

My family used to eat at the New Riverside restaurant.  The food was mildly spicy - a bit different than the cantonese cuisine we were accustomed to eating.  We loved it, though, and the New Riverside became the place where we would take guests visiting from out of town.  Chef Tong was a vibrant personality.